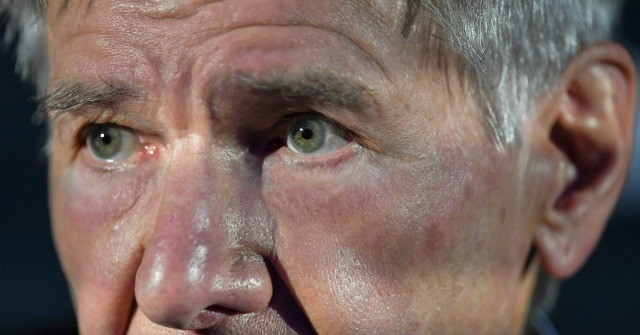 “This shit is going to kill us,” insisted actor Harrison Ford in a recent interview addressing what he calls a looming climate disaster. The Indiana Jones and Star Wars star actor implored voters to elect politicians who won’t ignore climate change.

“The climate crisis is real — the weight of scientific evidence is overwhelming… but evidence can be ignored, it can be manipulated,” said Ford in a recent interview with TIME magazine. “Leaders who choose to make climate change a divisive issue do it to protect the entrenched economic interests who profit from behavior that destroys our planet. It’s selfish. It’s short-sighted. It needs to stop… This shit is going to kill us.”

Ford, who is an avid climate change alarmist, went on to say that “we have people in leadership positions who refuse to accept objective science.”

“They’re robbing us of the ability to collaborate, to compromise, to move forward,” said the Frantic actor.

In August, Ford flew his 19-year-old son off to college on a carbon emissions-pumping private jet. He, his son, and his wife were spotted exiting the jet in Amherst, Massachusetts.

Earlier this year — while in in Mexico City to promote his latest film — the actor praised teenage climate worrier Greta Thunberg and trashed the United States, claiming that the nation has lost its “moral leadership” on issues such as improving the environment, as well as immigration policy.

Last year, Harrison Ford demanded that the world “get the hell out” of Thunberg’s way, stating that saving the Amazon rainforest is crucial to any climate change solution and that young climate activists represent the “moral army” who will make a difference.