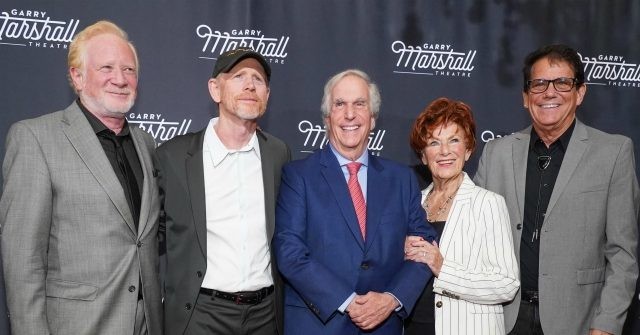 The cast of the 70s and 80s sitcom Happy Days will reunite in an eleventh hour virtual fundraiser to raise money to support the Democrat Party of Wisconsin’s push to flip the Badger State for Joe Biden in November.

“The most important election of our lifetimes is right around the corner and Wisconsin is a must-win swing state,” tweeted Happy Days star Ron Howard on Monday. “So, I’m thrilled to announce a #HappyDaysReunion to support [Wisconsin Democrats] on Oct 25. Chip in any amount to attend.”

The most important election of our lifetimes is right around the corner and Wisconsin is a must-win swing state. So, I’m thrilled to announce a #HappyDaysReunion to support @WisDems on Oct 25. Chip in any amount to attend – https://t.co/otVhvvojQZ

Howard will also be joined by cast members Henry Winkler, Anson Williams, Marion Ross, and Don Most. Additional “special guests” are also expected to be in attendance at the virtual event.

“Anything you donate will be used to ensure that Trump loses Wisconsin, and thereby the White House,” reads the event description.

Attendees can donate any amount over $1 if they want to tune in for the reunion, which will include a Q&A that the cast will participate in, according to a report from Variety.

“We’re thrilled a show made famous in Milwaukee is coming back home to help make Donald Trump a one-term President,” said Winkler. “We know all roads to the White House go through the Badger State, and with the cast of ‘Happy Days’ helping us raise money to take back the White House, we believe even more we can deliver a victory on Nov. 3.”

The cast of Happy Days is just the latest to reunite in a last minute attempt to push Wisconsin in Joe Biden’s column in November.

In September, the cast of Parks and Recreation, Veep, and The Princess Bride also reunited for virtual fundraisers in an attempt to expand the coffers of Wisconsin’s Democrat Party.