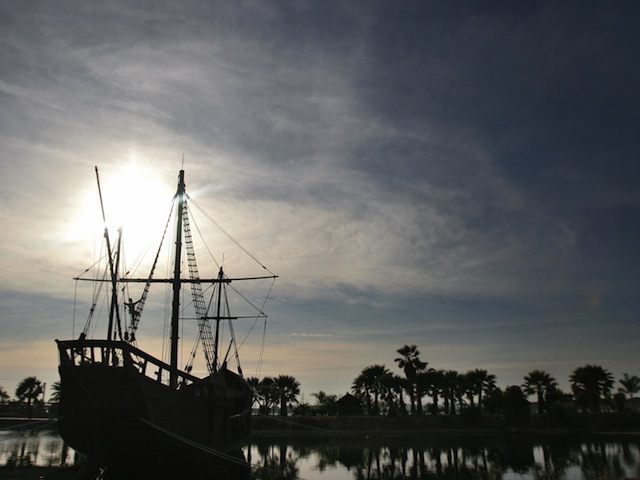 It’s that time of the year– a time to celebrate the indelible mark left by the Spanish empire on our cultural identities and the inextricable link between Spain, America, and Christianity: Columbus Day. In the past few decades, the holiday has been sabotaged by leftist movements seeking to turn Christopher Columbus into the sacrificial lamb of European America, calling for statues of the man to be taken down and the second Monday in October to be renamed “Indigenous Peoples’ Day.”

While Columbus was the first European with the courage to venture west enough to find this hemisphere– hence becoming a lightning rod for anti-white sentiment– he was no successful conquistador, and his adventure is largely responsible for America (and greater Latin America) being a heavily Christian land. The discovery of the Americas by the Spanish empire, and not the English, also led directly to the formation of what is now modern human rights theory, and it was a Spaniard who applied the budding human rights concepts in Catholic doctrine to Native Americans for the first time.

This, as Americans, we should celebrate.

It has become somewhat taboo to celebrate Columbus, however. To celebrate Columbus Day, write authors Deloris Wilson and Christian Fletes at the Harvard Kennedy School, “valorizes a story in which its actors chose to kill rather than cohabitate, steal rather than compensate, and subjugate rather than respect.” Left-wing leaning UK newspaper The Guardian disregards the systematic efforts by descendants of the English to subjugate native populations Columbus never even encountered to call him a “lost sadist.” The Spanish language Twitter hashtag #nadaquecelebrate (#nothingtocelebrate) is rife with political cartoons and acrimonious anti-Spanish sentiment on this October 12.

Italian Americans appear to be the only group in the United States loudly embracing Columbus because of his presumed birth in Genoa, Italy. John M. Viola, president of the National Italian American Foundation, defended Columbus to US News & World Report, calling the “idea of a victimized culture” on the part of Native Americans unhealthy. Columbus went from symbol of Spanish pride to symbol of Italian resistance against Anglo discrimination in the late 1800s, and is now a central part of many celebrations of Italian heritage. Thanks to America’s Italians, we of Spanish heritage can enjoy an annual Columbus Day parade in New York City.

The Anglo discrimination that led to Italians embracing Columbus continues to exhibit itself not just through the calls for an end to celebrating Columbus, but calls to replace him with Leif Erickson, an exiled Icelandic criminal who may have touched Canadian soil after his community expelled him and his father, Erik the Red, for mass murder.

Muslims, too, have joined in this rancor; President Recep Tayyip Erdogan has claimed, citing no evidence, that Christopher Columbus found mosques in Cuba, leading him to conclude that Eurasian Muslims had discovered the hemisphere.

The universal– save for Italian-Americans– vitriol serves to mask the positive contributions of the Spanish to American culture. Specifically, it is thanks to Columbus that most of the Western Hemisphere remains a modern Christian land (and not a Puritan tyranny, as the folks on the Mayflower may have had it), and it is Christian tradition that led to the founding of the modern human rights movement. Columbus himself was a devout Christian, and expressed excitement in his first letter from the Americas to the Spanish monarchs that the Natives of the islands he had found may one day convert to Christianity.

Bartolomé de las Casas, a Catholic clergymen whose interactions with the Native Americans would lead him to eventually found modern human rights theory, wrote of Columbus:

He observed the fasts of the church most faithfully, confessed and made communion often, read the Divine Office like a churchman, hated blasphemy and profane swearing, and was most devoted to Our Lady and to the seraphic father St. Francis. . .

It is important to note that the abuses for which the Spanish would one day be famous for on mainland North America– the attempts to convert Native monarchs like Atahualpa and Montezuma— occurred long after Columbus had authority in the eyes of Spain. But just as Columbus prompted Cortés and Pizarro, so too did he prompt de las Casas.

In his book A Short Account of the Destruction of the Indies (1552), the Dominican friar attempted to document the abuses he saw of Native American populations and advocate for an end to Spanish colonization of their people. Traveling to the Caribbean in 1509 had led him to joining the clergy, after freeing his slaves, and returning to the Americas to argue against the enslavement of Caribbean natives.

“All the people’s of the world are men,” he wrote, more than a century before John Locke. Unlike Locke, he specified that he meant non-Europeans, specifically: “For all people of these our Indies are human… and to none are they inferior.”

These ideas were radical not merely for Catholic clergymen, but for any European to speak aloud. Encounters with Turks, Africans, Mongols, and the Chinese failed to lead any European to proclaim such radical human rights ideology. Only arriving at the Americas could prompt that.

None of this denies the suffering of indigenous people at the hands of Hernán Cortes or George Custer, or that the heritage of Native Americans should be celebrated. It is an unmistakeable part of the Latin American identity and deserves a role in Hispanic Heritage Month, if we choose to entertain that concept. But to deny that Spain– and Columbus in particular– also deserve an outsized role in the celebration of Hispanic and Christian American culture is to simplify history for convenience. There is room for both.

So this Columbus Day, celebrate the commitment of Spanish Christians to make the world a smaller place, and their contributions to both the spread of American Christianity and the modern concept of universal human rights.