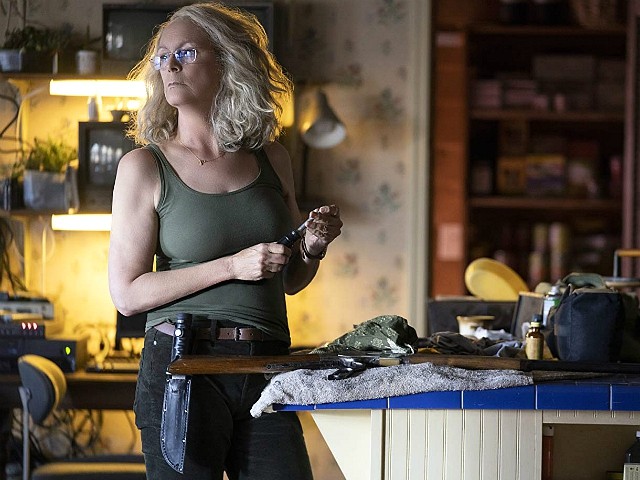 Maybe I should’ve avoided watching John Carpenter’s 1978 original yesterday afternoon. Knowing, though, that David Gordon Green’s Halloween is a direct sequel, that it not only erases Rob Zombie’s two whiffs but also the three sequels starring Jamie Lee Curtis, made that a bit of a necessity; not that I ever require an excuse to see Carpenter’s original masterpiece.

The first time I saw the original Night He Came Home was, well, forty years ago. Not in a theater, but its initial run on HBO. I was all of 12 and begged my dad to let me stay up. He gave in, and all by myself, in that big old house of ours, the story of Michael Myers and Laurie Strode unspooled.

To this day, my dad swears that when he came down the next morning, every light in the house was on and a still-smoldering couch was jammed up against the back door. I honestly don’t remember turning on the lights.

Over the years, I have seen Halloween somewhere between 20 and 30 times. That is how good it is. Like Hitchcock’s Psycho, the scares are immaterial. The way in which Carpenter meticulously assembles the pieces of his precision watch, the way in which this watch starts to tick during those final, breathtaking 30 minutes — that is as good as filmmaking gets. The characters pop. The story is laser-focused. The score, the cinematography, the refusal to explain Michael…

Hell, I may watch it again this afternoon.

So… Does my affection for the original and most of its sequels (I laid my thoughts out on all ten titles here) mean that for rape-my-childhood reasons I want this latest entry to fail? Nope. Quite the opposite. They did it right. They brought back Curtis. They brought back Carpenter (to score and executive produce). The even brought back Nick Castle as Michael aka The Shape (sharing credit with Tony Moran).  Nothing would have made me happier than to see Halloween 2018 stick the landing.

Unfortunately, for a whole host of reasons, it stumbles badly.

As I mentioned above, all the mythology built up over eight sequels/remakes is tossed. This includes 1981’s solid Halloween II and 1998’s superb Halloween H20 — both of which starred Curtis. Naturally, the so-corny-it’s-awesome Cult of Thorn has been 86’d.

So here is how the new one lays out…

Laurie Strode is not the sister of Michael Myers (a big reveal in Halloween II). She is just the shattered sole survivor of the 1978 Babysitter Murders who has dealt with the trauma by preparing and praying for Michael to escape so they can finally finish this thing.

She’s also a mother, grandmother, and alcoholic — and looks every day of it. Most of all, she’s a doomsday prepper, a crack shot, and an embarrassment to her family. But like every doomsday prepper, we are all going to stop laughing when the end of the world arrives.

As for Michael, he was captured that first night and has spent four silent decades in an insane asylum.

Are there scares? A couple.

Is there fan service? Some.

Are there laughs? Yeah, that kills the suspense.

Does the climax climax? Yeah, no.

Is there suspense, dread, a knot in your stomach that has you praying for the whole thing to end so the lights can come on? Not even close.

Halloween 2018 is a mess, scattershot, all over the place… Think about the original, think about how tight that sucker is. Michael looms over everything, especially the first 30 minutes, and through his omnipresence, the story focuses only on our trio of babysitters and Dr. Loomis (a perfect Donald Pleasance). Most of the action takes place in two locations, so you always know exactly where you are, who you’re with, and what’s going on.

For reasons I will never understand, Halloween 2018 is like a Robert Altman version of Halloween, an unnecessarily large canvas of characters that sprawls out all over Haddonfield. There is Laurie, her grown daughter Karen (Judy Greer), her husband (Toby Huss), their daughter Allyson (Andi Matichak), her boyfriend, their friend, her friend (the sole babysitter), two British journalists, and Dr. Sartain — a Loomis protégé. Oh, and a sheriff and Will Patton’s deputy…

Haddonfield has grown from this sleepy little bedroom community into a rural county filled with forests and back roads and estates and Laurie’s woodland fortress … We’re over here, we’re over there… Characters get separated, or have no connection, or disappear completely after we’re invested in them (Allyson’s boyfriend and the scene-stealing Jibrail Nantambu both go *poof*).

This geographical sprawl also undermines the looming omnipresence of Myers. Worse, he seems to be a wanderer lucking into all the right people to kill. What I mean is that it never makes sense that he knows who to target. Everyone is so spread out, he cannot possibly follow them all. Remember how ingenious Carpenter was in making Laurie Strode the target? The innocent act of dropping off a key at the Myers’ house for her realtor dad marked her, and by extension, her two girlfriends, for death. The random efficiency of that, the simplicity was just brilliant.

And so,  you keep hoping  the story will finally settle down and land where it belongs: on Laurie, her daughter, and granddaughter — but it never does. And yes, a lot of supposedly smart people do a lot of dumb things, including the super-prepared Laurie.

If you have spent 40 years going to all the trouble to manufacture a secret panic room where you can hide your family, why in the name of holy hell would you fire a gun to give your secret location away?

Oh, and by all means, run into the woods.

And that moment with Dr. Sartain made me want to punch the screenwriters.

And then there is the lack of personality in our young stars.

Remember how the original babysitter trio shined? Curtis as the nerdy beauty, Nancy Kyes as the cynical but funny Annie,  and the incomparable PJ Soles as the beauty totally into pleasure-seeking, totally into being young? Does America no longer grow young actresses who are interesting, who have a presence, who have that something that distinguishes them from background actors?

There was a pretty good movie in Halloween 2018, a movie that focused on Laurie, Karen, and Allyson;  on the dynamic of their complicated relationships, which felt very real. This leaves you frustrated instead of scared, it also makes it impossible to build any suspense.