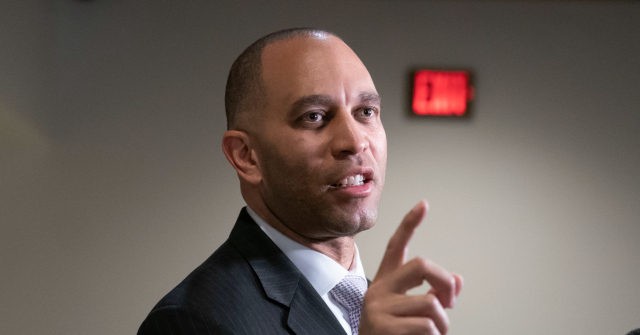 Rep. Hakeem Jeffries (D-NY), the fourth-highest-ranking House Democrat, said in a podcast to be released on Wednesday that impeachment hearings for President Donald Trump should “commence immediately.”

Rep. Jeffries, the House Democrat Caucus chair, said in a podcast with Toure that he believes the House Judiciary Committee should begin hearings relating to impeaching President Trump as soon as possible.

The Judiciary Committee, on which I sit, should have hearings on three things: obstruction of justice, abuse of power and the culture of corruption that appears to exist at 1600 Pennsylvania Ave. I’m of the view that those hearings should commence immediately. And we need to present the information to the American people. What you call those hearings — that is a decision that will ultimately be made by Chairman Nadler and Speaker Pelosi.

Many Democrats such as Rep. Steve Cohen (D-TN) have suggested that House Speaker Nancy Pelosi (D-CA) has avoided impeaching President Trump due to her alleged worry that it could endanger her House majority.

Pelosi faces an increasingly rabid Democrat base that wants to impeach the president, and many rank-and-file, as well as Democrat leaders, want to start impeaching proceedings on the president.

Jeffries contended that the decision about impeaching Trump should not remain anchored in politics.

“It would be dangerous for us to make a decision about impeachment anchored in politics either way. To either decide that we’re not going to impeach because it would be bad politically or that we’ll dive into impeachment because it’ll help politically,” the New York Democrat said.

Rep. Jeffries then said that the Robert Mueller report has presented 11 different episodes where Trump allegedly engaged in obstruction of justice, which could lead to potential impeachment charges.

“At the end of the day we’re charged with the solemn constitutional responsibility of trying to figure out, did this president commit high crimes and misdemeanors? The Mueller investigation has presented at least 11 different instances of serious obstruction of justice that could lead to that conclusion,” he said.