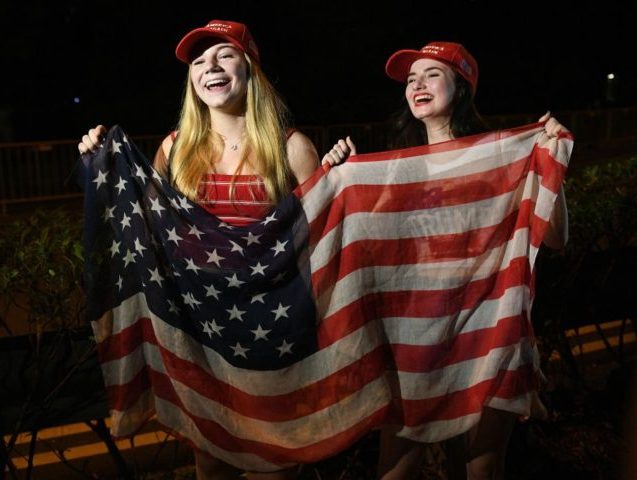 The 53 percent of white women who voted for Trump in 2016 bear out “the conventional wisdom that white women would rather choose the racism espoused by the Republican party than join in the moral coalition represented by men of color and other women,” writes Guardian columnist Moira Donegan in an over-the-top essay.

While white men “support Republicans at alarming rates,” she states, white women should know better since they are themselves victims of sexism.

The reason that no decent, intelligent woman should vote Republican, especially in the present context, is the “sadistic racism that is Donald Trump’s stock and trade” as well as the “peevish, racist cruelty” embraced by his supporters, Ms. Donegan confidently proclaims.

White women need to “break with their historical loyalty to white supremacy and embrace a kinder, more sustainable model for the future,” she states, meaning, of course, a shift to the Democrat party.

“But white women are not leaving the Republican party as fast as one might hope,” she continues, evidence of which is that white women in Texas supported “the reptilian Ted Cruz” by 59 percent in midterm elections.

“What is wrong with white women?” she asks rhetorically. “Why do half of them so consistently vote for Republicans, even as the Republican party morphs into a monstrously ugly organization that is increasingly indistinguishable from a hate group?”

The astonishing conclusion Donegan comes up with is that white women must themselves be racist. They have embraced the opportunity to “savor the pleasures of being cruel.”

“It is likely that the white women who voted for him in 2016, and who will vote for him again in 2020, find this racist sadism gratifying. It is fun for them,” she states.

The “persistent sexism” of the Republican Party can be seen in their dislike of Hillary Clinton as well as in “the mocking and hounding of Dr Christine Blasey Ford, and in the theatrical sexism that Brett Kavanaugh displayed at his confirmation hearing,” she proclaims, while conveniently forgetting that Judy Munro-Leighton publicly admitted that she had invented claims that Kavanaugh had raped her “several times,” saying that in fact she had never even met Kavanaugh.

There is, of course, another possibility that Ms. Donegan does not explore. Some people — white women included — may just prefer to think for themselves rather than be told how they are supposed to think as members of a certain demographic.

Some white women may indeed find the Democrats’ full-bore support for abortion-on-demand and its marriage to abortion giant Planned Parenthood to be distasteful, if not despicable.

Others may think that it is good for Americans to have jobs and want to see the economy booming, rather than sucked dry by bloated government programs demanding more and more tax dollars.

Still others may reject the Democrats’ identity politics, preferring instead to live in a country where people are not judged “by the color of their skin, but by the content of their character.”

Whatever the reason, a sneering, condescending article suggesting that there must be “something wrong” with white women who vote Republican may just galvanize them in their intentions to keep doing so.