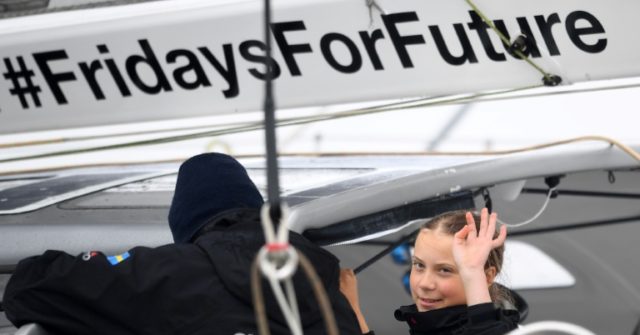 Swedish green teen Greta Thunberg, who started a global “Fridays for Future” school walkout movement to demand adults fight so-called manmade climate change, was at a protest at the White House on Friday where small children and teens carried signs and chanted against fossil fuels, corporations, capitalism, immigration laws, and the right to health care.

Thunberg, who has said she doesn’t want the attention to be on her but rather her cause, said a few brief words about being overwhelmed by the size of the crowd, which seemed to be a couple hundred.

Others in the crowd, though, were not reticent about their message, which included scorn for President Donald Trump, oil and gas corporations, and anyone who does not agree with them and who will face “hell” until they come around, as one protester put it.

The speakers said hurricanes, wildfires, and hot weather are all caused by manmade climate change.

“We’re seeing natural disasters happening on every corner of the planet,” Jerome Foster II told the young people who held signs that claimed recycling could save the planet and “The Earth is on Fire.”

“Our future is a right,” Foster said.

“No more coal, no more oil, keep your carbon in the soil,” the crowd shouted.

“What do we want? Climate action. When do we want it? Now!”

Some of the group took part in an 11-minute “mass extinction” or “die-off” to mark the number of years left until “climate catastrophe.”

A large number of media outlets were on hand to cover the event and were held back as a group with ropes and “marshals” assigned by protest organizers.

Thunberg, who came to the United States last month to attend a September 23 climate summit at the United Nations, did not answer questions from the media at the event but apparently granted an interview to National Public Radio (NPR).

“You are such a big country,” Thunberg told NPR. “In Sweden, when we demand politicians to do something they say, ‘It doesn’t matter what we do — because just look at the U.S.’”

“I think [the U.S has] an enormous responsibility” to lead climate efforts, Thunberg said in the NPR report. ”You have a moral responsibility to do that.”

Thunberg traveled to the United States from Europe last month on a racing yacht to avoid flying in a plane, despite the fact that the boat is made from a fossil-fuel based product and the yacht crew traveled back by plane.

It is not clear if the children and teens who are taking part in these Friday protests have permission from their schools to skip classes.

And despite the movement being “youth-led,” there are many adult-lead environmentalist groups offering their support, including the Sierra Club and the United Nations.

Amazing and inspiring pics from the weekly #ClimateStrike with @GretaThunberg & many other young people – who are doing it in front of the White House this week! pic.twitter.com/TSkAXBevQm

At one point during the protest, organizers asked adults to step away from the protest so that media coverage would focus on youth.