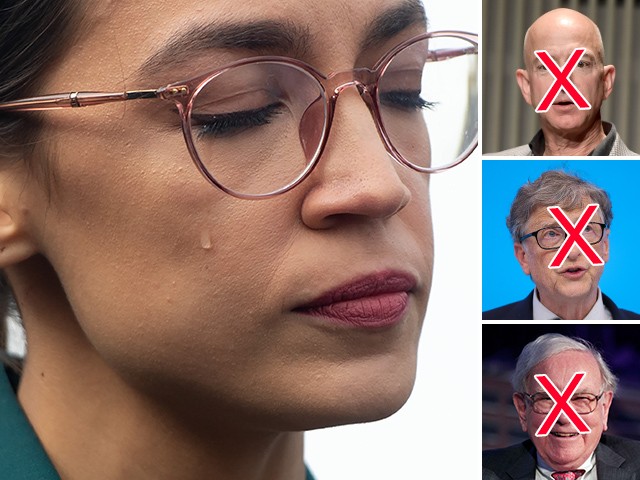 Progressive Democrats admit in their newly-unveiled Green New Deal outline that the resources of every billionaire and company would not cover the proposal’s cost.

As part of the outline’s FAQ section, the plan’s authors argue the country’s current tax system and regulations do not generate enough revenue to pay for a proposal to replace all fossil fuel energy production. To illustrate the point, the outline states: “The level of investment required is massive. Even if every billionaire and company came together and were willing to pour all the resources at their disposal into this investment, the aggregate value of the investments they could make would not be sufficient.”

Further, the outline claims that even if all billionaires and corporations were willing to invest in the Green New Deal’s projects, they do not operate efficiently enough to make “massive investments in unproven reach and technologies” in a narrow period of time. The government, the outline says, “has the time horizon to be able to patiently make investments in new tech and R&D, without necessarily having a commercial outcome or application in mind at the time the investment is made.”

Despite its lofty objectives, the outline does state how much it would cost to implement the proposal.

During a press conference Thursday afternoon, Rep. Alexandria Ocasio-Cortez (D-NY) and Sen. Ed Markey (D-MA) announced their decade-long plan to tackle “climate change,” which they hope will eliminate all “pollution and greenhouse gas emissions” to meet “100 percent of the power demand in the United States through clean, renewable, and zero-emission energy sources.”

In a statement announcing the outline, Ocasio-Cortez said the “Green New Deal” would be paid for “the same way we paid for the original New Deal, World War II, the bank bailouts, tax cuts for the rich and decades of war — with public money appropriated by Congress.”

In a separate section of the outline’s FAQ, it is suggested that a small portion of the proposal’s funding could come from a carbon tax. “We cannot simply tax gas and expect workers to figure out another way to get to work unless we’ve first created a better, more affordable option,” the outline reads. “So we’re not ruling a carbon tax out, but a carbon tax would be a tiny part of a Green New Deal in the face of the gigantic expansion of our productive economy and would have to be preceded by first creating the solutions necessary so that workers and working class communities are not affected.”

Speaking with CBS’s 60 Minutes host Anderson Cooper in January, Ocasio-Cortez floated increasing the marginal tax rate to 70% for those earning more than $10 million to help pay for the Green New Deal.

Several Democrat presidential contenders said they will support the proposal, including Sens. Elizabeth Warren (D-MA), Cory Booker (D-NJ), and Kamala Harris (D-CA). Last month, a spokesperson for former Rep. and potential White House contender Robert Francis “Beto” O’Rourke (D-CA) told HuffPost he is  “supportive of the concept” of a Green New Deal, but did not give specifics as to which aspect of the proposal he is in favor of.