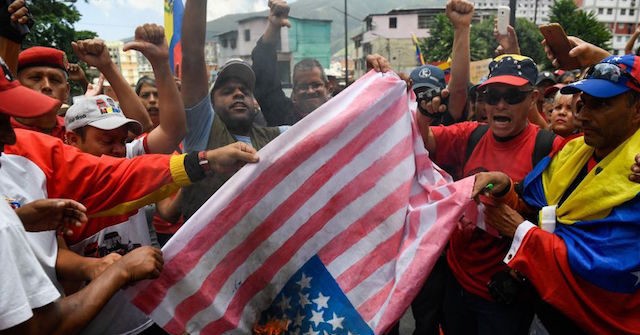 The second wave of riots is here. Escalating violence in Portland. A surge of rioting in Seattle. Police in Chicago ambushed. Daily confrontations are happening again. The premeditated violence has inspired violence elsewhere. That ripple effect is always the intent.

We know this, not only from Chinese communists and European fascists, but from socialists in Latin America.

The summer riots in the United States followed similar patterns as those in Latin America last year. The “breeze” of legitimate protests in urban areas after the killing of George Floyd in Minneapolis quickly escalated into a “hurricane” of violence against government institutions and private businesses. These were specific targets that represent national sovereignty and free markets, respectively.

Here is a quick refresher.

Once led by Hugo Chávez of Venezuela and now Nicolás Maduro, the Bolivarian Alliance can be best understood as a transnational effort to achieve 21st-century socialism in the Americas. At its zenith, the alliance consisted of 11 countries and three observers, including Iran and Syria. The Bolivarian Alliance has most recently morphed into a political-criminal network that seeks to destabilize American communities through the purposeful deployment of cocaine. It has also fomented unrest in those Latin American countries pursuing free market and democratic reforms.

In mid-October 2019, Chile saw protests against a 4-cent rate hike on public transit escalate into organized, mass riots. Much like in the aftermath of George Floyd’s death, professional agitators attempted to and, in some cases, successfully burned government buildings and private companies.

That same month, activists and instigators tied to Venezuela and the Revolutionary Armed Forces of Colombia (FARC) – a communist guerrilla movement in Latin America and ally of the Maduro regime – caused so much violence in Ecuador that President Lenin Moreno had to leave the capital. All this after the Moreno government announced a plan to end fuel subsidies.

Protests then broke out in Colombia in November in response to the government’s plan for pension reform. When the protests turned violent, civilian groups with ties to the FARC were found to have been at the “forefront” of the subsequent unrest.

In early 2020, Diosdado Cabello bragged that this “Bolivarian Hurricane” in Latin America would soon strike the United States.

Americans then watched as outspoken Maduro supporters fomented unrest in Miami in June 2020. Some protesters flew flags of the socialist Sandinista party of Nicaragua in South Florida, while some in Minneapolis waved the flag of the Mapuche indigenous group in Chile. Agitators in D.C. sported Hugo Chávez imagery. All iconography that represents the Bolivarian Network.

In Bolivia, riots that followed the resignation of former President Evo Morales last year were accompanied by insurgent tactics by Evo and his supporters to try and block food from entering urban cities. Bolivian authorities published audio of an intercept conversation Morales personally had with a henchmen in which he is heard saying exactly this: “don’t let food into the cities.” A concerning sign of things to come should U.S. socialist and anarchist agitators follow the playbook of their South American counterparts.

The recent U.S. protests have been accompanied by statues being torn down, street names being changed, and brands reevaluating mascots and taglines. A Venezuelan actress living in the United States expressed concerns over the trajectory of these developments, writing on social media that: “statues came down – [Hugo] Chávez didn’t want that history displayed … and then he changed the street names … then came the school curriculum … then some movies couldn’t be shown, then certain TV channels, and so on and so forth.”

For many in Latin America, socialism is more than just a failed theory or ideology. For those in Venezuela, Cuba, Nicaragua, and more, socialism represents repressive regimes where citizens no longer have a voice or a vote. Those failures are now being exported to other countries through mass national protests, themselves long departed from their original grievance. Venezuela’s Maduro regime and its allies have turned unrest into an asymmetric weapon of warfare, intent on destabilizing the neighborhood.

America remains well positioned to push back against the socialist threat because of the economic principles to which it subscribes. Free markets, more than any other freedom, defy the privileges of the socialist elite and expose their fraudulent ideologies.

David Grantham is a Senior Fellow for the Center for a Secure Free Society (SFS) and author of the book Consequences: An Intelligence Officer’s War. His website is granthamstrategies.com. Excerpts of this article were taken from the most recent Transregional Threats Journal of SFS.