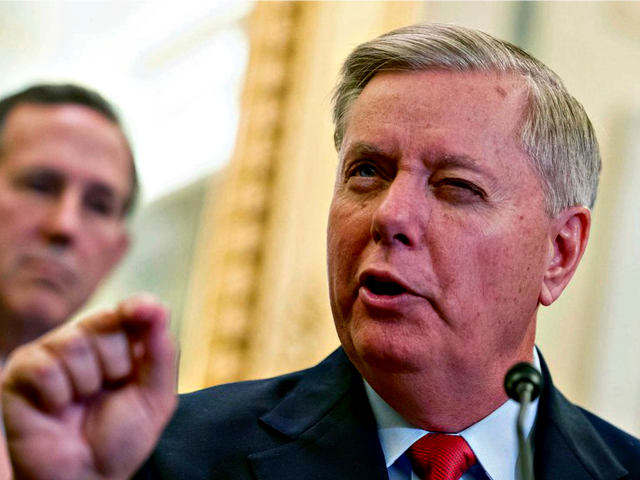 Graham said “Here’s what I can say. I’m really upset that they knew about this in August and never told anybody. I’m really upset if Dianne Feinstein believed this was a credible allegation that she wouldn’t do Judge Kavanaugh the courtesy of saying, ‘I’ve got this, what’s your side of the story?’ Turn it over to the committee. When they say, we weren’t sure if they were willing to go out there, that’s a bunch of bull. We were were willing to go to California we were told she couldn’t fly. Their goal is to win the Senate and never allow Trump to fill the seat. I don’t know who paid for a polygraph but somebody did. Here’s what I’m more convinced of; the friends on the other side set it up to be just the way it is. I feel ambushed.”

He continued, “As the majority, we’re going to hear from Judge Kavanaugh and I’ve been a judge, a prosecutor and a defense attorney and here’s what I’ll tell you. When it comes to where it happened, I still don’t know. I don’t know when it happened. She said she’s 100% certain it did happen. I bet you Judge Kavanaugh will say I’m 100% sure I didn’t do it. The people named say they don’t know what Mrs. Ford’s talking about, she can’t tell us how she got home and how she got there. Those are the facts. I’m left with a nice lady who has come forward to tell a hard story that’s uncorroborated. Based on what I heard today, you could not not get a search warrant or arrest warrant. You don’t know the location, the time. You don’t have any corroboration. As to Mrs. Mitchell, that’s what I hope she would do. I heard a bunch of speeches from a bunch of politicians who have politicized this from day one, who have been lying in wait for a political purpose.”

He added, “I’m not going to reward people for playing a political game, I think, with her life. She is just as much a victim of this as I think Brett Kavanaugh, because somebody betrayed her trust and we know who she gave the letter to. And the people that betrayed her trust owe her an apology.”