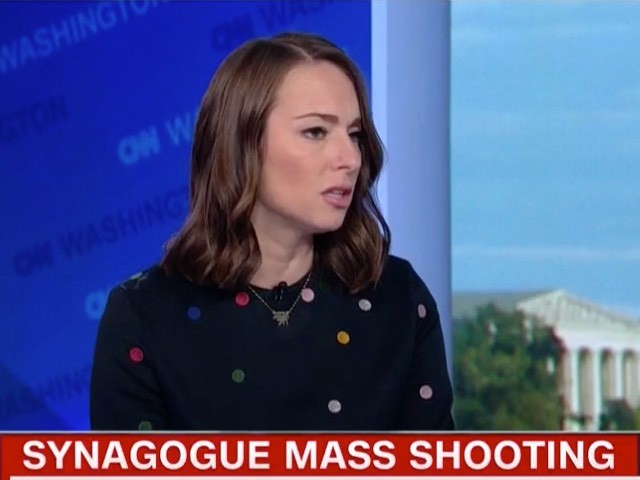 During Sunday’s CNN “Newsroom,” GQ Magazine correspondent Julia Ioffe weighed in on the synagogue shooting from the day before.

She accused President Donald Trump of “trafficking in” “anti-Semitic tropes” since he took office.

“It’s the largest, according to the [Anti-Defamation League], largest one-year increase [in anti-Semitic attacks] since the organization has started tracking this in 1979. And that year happened to be the first year of Donald Trump’s presidency,” stated Ioffe. “You have talked to the now-president about this back in 2016. You know, this tale of kind of anti-Semitic comments, anti-Semitic tropes seem to follow him everywhere, to the point where his Jewish son-in-law had to write an op-ed saying my father-in-law is not an anti-Semite. Usually, if you have to say that, it means people keep accusing you of being an anti-Semite, and there might be fire where that anti-semitic smoke is.”

“I think he has emboldened and heartened a lot of people who hear the dog whistles. They know exactly what they mean. They feel that the president approves. They have said as much, that if you look at alt-right commentary after the president’s moral equivocation on Charlottesville, if you look at his inability to until really forced, to denounce people like David Duke, former grand wizard of the KKK, they understand this and understand he’s on their side, not on the side of frankly of the Jewish community,” she continued.

Host Wolf Blitzer pointed out how the shooter spoke out against Trump and his affection for Jewish people, but Ioffe doubled down, saying “it’s not a coincidence” people picked up on his anti-Semitism and acted on it.

Ioffe added, “I think this rhetoric is out there, in the air. All the attacks on George Soros, all the talk about globalists. That’s so barely veiled, the veil is see through. These are anti-semitic tropes the president has been trafficking in, and it’s not a coincidence that these people pick up on this and think if you’re talking about this, let’s do something about this. They get so riled up that even what he says is not enough.”