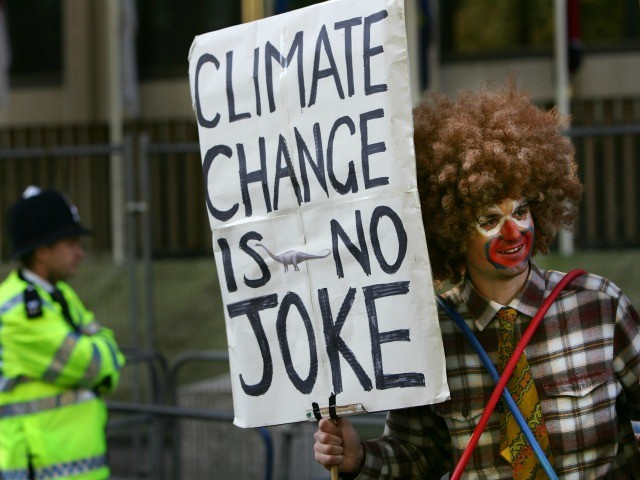 The federal government has issued a mandated report on climate change that claims that the United States is already suffering from manmade pollution and a future that is much worse if not stopped, all based on “scenarios” that may or may not happen.

The tools section of the report includes the words “plausible,” “possible,” and “may evolve” to reveal how data is based on models about what could happen.

“Scenarios are coherent, internally consistent, and plausible descriptions of possible future states of the world,” the report states. “Scenarios may be quantitative, qualitative, or both.”

“The components of a scenario are often linked by an overarching logic, such as a qualitative narrative of how the future may evolve,” the report states.

The report was released on Friday, which the media claimed the Trump administration did purposefully to bury it on a holiday weekend where most people are more interested in eating and shopping than reading a massive government document.

And the media reports on the findings as fact rather than speculation, including CNN:

A new US government report delivers a dire warning about climate change and its devastating impacts, saying the economy could lose hundreds of billions of dollars — or, in the worst-case scenario, more than 10 percent of its GDP — by the end of the century.

Coming from the US Global Change Research Program, a team of 13 federal agencies, the Fourth National Climate Assessment was put together with the help of 1,000 people, including 300 leading scientists, roughly half from outside the government.

It’s the second of two volumes. The first, released in November 2017, concluded that there is “no convincing alternative explanation” for the changing climate other than “human activities, especially emissions of greenhouse gases.”

The report includes predictions of dire consequences from climate change, including people dying because of increased temperatures.

“Higher temperatures will also kill more people, the report says,” CNN reported. “The Midwest alone, which is predicted to have the largest increase in extreme temperature, will see an additional 2,000 premature deaths per year by 2090.”

The report also said there would be more insect-borne diseases, including West Nile cases,  which could more than double by 2050.

But perhaps the most striking revelation in the huge report is that it offers no specific solutions to its speculated scenarios.

“The report was created to inform policy-makers and makes no specific recommendations on how to remedy the problem,” CNN reported. “However, it suggests that if the United States immediately reduced its fossil fuel use and greenhouse gas emissions, it could save thousands of lives and generate billions of dollars in benefits for the country.”

The report also notes, ironically, how difficult it is to predict future climate.

“Scientific ability to predict the climate at the seasonal to decadal scale is limited both by the imperfect ability to specify the initial conditions of the state of the ocean (such as surface temperature and salinity) and the chaotic nature of the interconnected earth system,” the report states.

The left is calling the report a rebuke to President Donald Trump, who has said proof of manmade climate change is not conclusive, including leftist climate change guru Al Gore.

“The president may try to hide the truth, but his own scientists and experts have made it as stark and clear as possible,” Gore said in a statement on Friday.