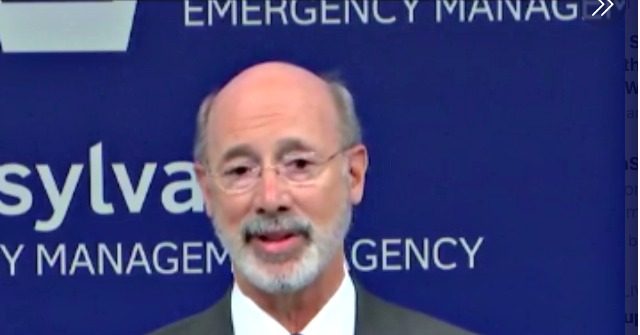 Wolf said during Friday’s press briefing that his stay-at-home order has saved lives, and he announced two weeks of sustained reductions in hospitalizations of coronavirus patients, dropping by nearly 1,000 patients from May 8 to May 21.

Forty-nine of the state’s 67 counties are currently in the state’s yellow phase of reopening. That number will increase to 57 next Friday, with the addition of Dauphin, Franklin, Huntingdon, Lebanon, Luzerne, Monroe, Pike and Schuylkill moving to the yellow phase. However, Wolf signaled that the remaining counties could remain under the strict red phase until June 5.

“And we anticipate the remainder of the state to be moved into the yellow phase by June 5,” he stated.

Wolf also announced that 17 counties will be permitted to move into the green phase of reopening on Friday, May 29:

I’m announcing these counties will move from the yellow to green phase of reopening May 29:

The green phase eases the most restrictions, facilitating what Wolf’s administration has dubbed the “new normal.” It allows in-person business operations to increase capacity to 75 percent, restaurants and bars to operate at 50 percent capacity, and salons, barbershops, gyms, and other personal care services to operate at 50 percent occupancy. Appointments are “strongly encouraged.”

“All businesses must follow CDC and DOH guidance for social distancing and cleaning,” the guidance states, noting that officials will “monitor public health indicators” and “adjust orders and restrictions as necessary.”

Wolf stressed that green phase counties will “still require precautions” and reiterated his view that full normalcy hinges on the development of a vaccine.

“COVID-19 continues to be a threat to our health and welfare, and unfortunately that won’t change until we have a vaccine or a cure,” Wolf stated.

Wolf has faced a slew of backlash over his approach to reopening the Keystone State, as well as his issuance of threats against business owners — some of which the state has followed through with.

A Restoration PAC poll released this week showed President Trump leading Joe Biden (D) in the battleground state, experiencing a 4.7 percent jump from the previous survey. Restoration PAC founder and president Doug Truax noted that Trump’s bump could have something to do with the onslaught of frustration toward Wolf and his severe lockdown orders.

“Definitely seemed to be some backlash in Pennsylvania against the virus shutdown orders and a confidence that President Trump can resurrect the economy,” Truax said.