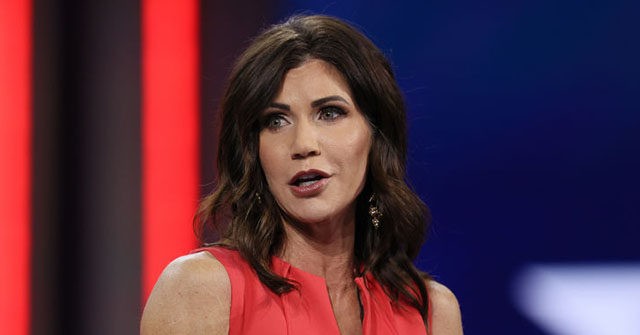 South Dakota Gov. Kristi Noem (R) returned a bill designed to prevent biological men from competing in biological women’s sports back to her state legislature on Friday for changes.

Noem cited in a public letter changes she is requesting to the bill, specifying they are revisions of “style and form.” The changes include removing collegiate athletics from the bill, thereby limiting its application to K–12 athletics, and modifying language about civil liability and performance-enhancing drugs.

The bill, House Bill 1217 titled “promote continued fairness in women’s sports,” had passed the South Dakota Senate on March 8. Upon its passage, Noem — whose name has been floated as a possible 2024 presidential contender after her hands-off approach to coronavirus in her state gained her prominence among the Republican Party — announced on social media she is “excited” to sign the bill:

Critics of Noem have perceived her rejection of the bill in its current state as backtracking in an attempt to appease pressure from outside entities. Terry Schilling, president of the American Principles Project Foundation, implied Noem faced pressure from the state Chamber of Commerce, writing on social media, “If you can’t stand up to the chamber of commerce, how the hell will you stand up to China”:

Moments like this are important. They tell you about the character of the person and whether or not they are presidential. If you can’t stand up to the chamber of commerce, how the hell will you stand up to China? https://t.co/uJ2XbVoyJ7

South Dakota Chamber of Commerce President David Owen confirmed to The Federalist that business groups were indeed pressuring the governor about the bill and threatening boycotts should it become law. “Employers view the workforce as a place of inclusion,” Owen told the outlet. “They’ve made it clear to us they won’t support groups that help pass laws that blindly discriminate in certain areas.”

In her letter on Friday, Noem said that after studying the bill and consulting with legal experts over several days, she had “become concerned that this bill’s vague and overly broad language could have significant unintended consequences.”

Noem argued the bill would cause collegiate athletics in her state to suffer because the “national governing bodies” — most notably the National Collegiate Athletic Association — would require compliance with their organizations’ policies that conflict with those of House Bill 1217. “South Dakota has shown that our student athletes can compete with anyone in the country,” Noem wrote, “but competing on the national stage means compliance with the national governing bodies that oversee collegiate athletics.”

“While I certainly do not always agree with the actions these sanctioning bodies take, I understand that collegiate athletics requires such a system – a fifty-state patchwork is not workable,” she added.

Noem also said the current bill is worded in such a way that students could be sued for using performance-enhancing drugs, including anabolic steroids, for reasons that extend beyond the bill’s intended scope, and the annual confirmation and ongoing monitoring for accuracy of students’ age, sex, and use of performance-enhancing drugs places an “unworkable administrative burden on schools.”

She concluded, “Overall, these style and form clarifications protect women sports while also showing empathy for youths struggling with what they understand to be their gender identity.”

Noem said she supports the bill and intends to sign it once the changes she has requested are made.