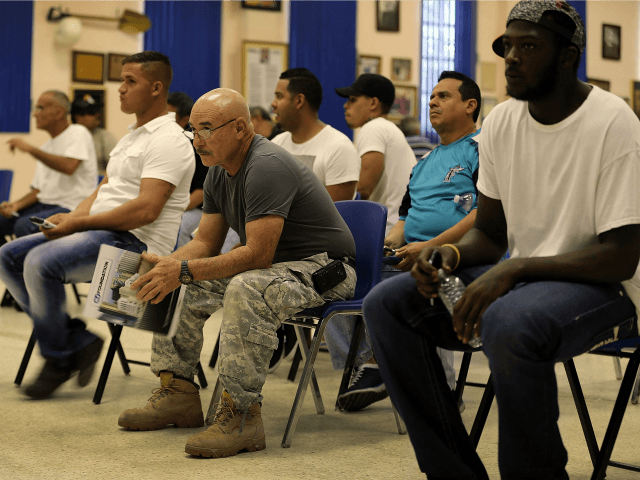 A plan to massively expand the importation of low-skilled foreign workers to the United States to take blue-collar U.S. jobs would cut America’s bottom line, the working class, out of labor markets.

Every year, the U.S. companies are allowed to import 66,000 low-skilled H-2B foreign workers to take blue-collar, non-agricultural jobs. The H-2B visa program is used by businesses to bring in cheaper, foreign workers and has contributed to blue-collar Americans having their wages undercut.

A provision in the job outsourcing scheme allows businesses in states and regions hit by natural disasters to import an endless number of foreign workers on the H-2B visa. Such a rule cuts working and middle-class Americans who are in those natural disaster areas out of the workforce when they need jobs the most.

“I’m sure their constituents would love to hear them explain why they are so eager to help employers keep wages down for lower-skilled American workers.” https://t.co/7eB3BzjC4W

A report in 2005 by the St. Petersburg Times revealed how New Orleans, specifically, was overrun by illegal alien workers following the Bush administration’s response.

R.J. Rouzan, for instance, shared his frustration with the government’s willingness to allow illegal aliens into New Orleans, despite homeowners not even being allowed to re-enter parts of the city.

“They let trucks full of illegal aliens in there and not the property owners?” Rouzan told a receptionist in New Orleans City Hall at the time, according to the St. Petersburg Times report. Even Mayor Ray Nagin seemed to agree with the frustration locals had with the Bush administration’s open borders response.

Federation for American Immigration Reform (FAIR) spokesperson RJ Hauman told Breitbart News in a statement that such an increase in the number of foreign workers allowed to take blue-collar American jobs is “unwarranted” and “harmful” to U.S. workers.

It is no surprise that powerful business interests are inappropriately looking to a must-pass spending bill to expand their access to cheap foreign labor. Opening the door for a significant increase in guest workers is not only unwarranted but harmful to the interests of American workers. An H-2B ‘deal’ has no place in a spending bill and should instead be debated openly after the government is funded. [Emphasis added]

Flooding the job market with cheap, low-skilled foreign workers would be a boon to special interests and an absolute betrayal of American workers. As President Trump correctly noted on the campaign trail, ‘the influx of foreign workers holds down salaries, keeps unemployment high, and makes it difficult for poor and working-class Americans – including immigrants themselves and their children – to earn a middle-class wage.’”

In total, there are roughly 1.5 million foreign workers in U.S. college-graduate jobs, plus at least 300,000 blue-collar or manual labor jobs. Meanwhile, there are five million Americans who are not in the labor force who want a job, with more than 500,000 Americans saying they are discouraged by their job prospects.

Every year, America’s working and middle class have their wages reduced by an inflow of more than 1.5 million mostly low-skilled foreign workers who are admitted to the country. This importation of illegal and legal foreign workers has left the country’s bottom line of workers with stagnant wages since the 1970s and forces them to compete with foreign workers for blue-collar jobs.