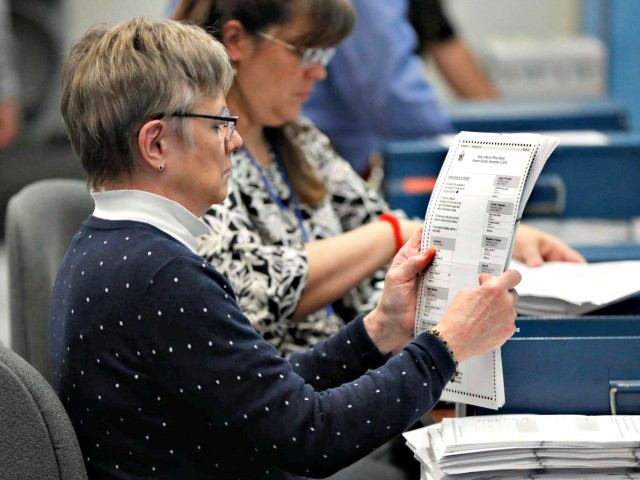 On Monday, Maine Secretary of State Matt Dunlap announced that a recount of the November 6 election in Maine’s Second Congressional District will begin on Thursday and will continue for an estimated four weeks.

Secretary of State Dunlap, a Democrat, declared Democrat Jared Golden the winner of the election on November 15, despite the fact that Rep. Bruce Poliquin (R-ME-02) received 2,632 more votes than Golden on election day, a consequence of the state’s implementation of a controversial “rank voting” system.

Thanks to a 2016 referendum that was placed on the state ballot and was passed due to the financial support of liberal Texas billionaire John Arnold, Maine’s 2018 federal election was the first time in American history that candidates were federal offices were selected using a complex “rank voting system.”

Since a Maine judge had earlier ruled that the “rank voting system” passed by voters in 2016 and affirmed by voters in June 2018 violated the Maine Constitution, state offices were selected by the traditional voting system used in the rest of the country–winners were determined by who received the most votes.

Federal offices–in this case the Senate race that incumbent Sen. Angus King (I-ME) easily won, and the state’s two seats in the U.S. House of Representatives–were decided by the complex “rank voting” system, as implemented by the Democrat Secretary of State, using a proprietary computer algorithm provided to the state by an outside vendor.

When Maine voters stepped into the voting booth on November they cast traditional ballots for state offices, but voted for their first, second, and third choices in the one federal race for the U.S. Senate the two federal races for the U.S. House of Representatives.

In order to be declared the winner, a candidate for federal office had to receive 50 percent plus one of the first place votes cast for the office. If no candidate received more than 50 percent plus one of the vote, then the second choice votes and third choice votes cast by voters whose first choice votes were cast for the third place and fourth place finishers were then allocated to the top two candidates based on the proprietary computer algorithm of the outside vendor selected by the Democrat Secretary of State.

In the November 6 election, Republican Poliquin finished in first place, receiving 131,631 votes, or 46.41 percent of the 283,643 votes cast that day, according to election results provided by the office of  Secretary of State Dunlap.

Since no candidate in the race received the 50 percent plus one votes required to be declared the winner under the new “ranked voting” law, Secretary of State Dunlap then used the outside vendor which deployed its proprietary algorithm to allocate the combined 23,013 votes cast for third place finisher Bonds and fourth place finisher Hoard.

Golden received 10,232 votes from voters who had declared in the November 6 election either Bonds or Hoar as their first choice, presumably declaring him on their ballots to be either their second or third choices. These additional votes gave Golden a new total of 139,231 votes, or 50.53 percent of the 275,557 votes counted in Round 2.

Poliquin received 4,695 votes from voters who had declared in the November 6 election either Bonds or Hoar as their first choice, presumably declaring him on their ballots to be either their second or third choices. These additional votes gave Hoar a new total of 136,326 votes, or 49.47 percent of the 275,557 votes counted in Round 2.

A total of 8,086 votes cast by supporters of Hoar or Bonds on election day were thrown away and not counted in Round 2 voting–“spoiled” is the legal term used–because, according to the Secretary of State, did not include choice rankings beyond the first choice.

Poliquin’s general campaign consultant Brent Littlefield issued a statement earlier this week noting that “his win was clipped by a new ‘Rank Voting’ system employed for the first time in a U.S. Federal election giving losing candidate voters (in this case two liberal independents who finished 3rd and 4th on Election Day) a second or third choice and those additional votes allowed challenger Jared Golden (D) to go ahead. In any other state in America Bruce Poliquin would have been declared the winner of the election.”

Poliquin and several voters in the Second Congressional District have filed a lawsuit in federal court arguing that the “rank voting” system approved by Maine voters in 2016 and reaffirmed in June 2018 is not constitutional.

On Wednesday, federal judge Lance Walker said he would decide the case soon.

“Attorneys for U.S. Rep. Bruce Poliquin and U.S. Rep.-elect Jared Golden argued in federal court Wednesday about the constitutionality of Maine’s ranked-choice voting law, the election process that propelled Golden to a victory over the two-term incumbent Poliquin in November,” the Portland Press Herald reported, adding:

Poliquin’s lawyers are asking U.S. District Judge Lance Walker to rule that the law, passed by voters in November 2016 and affirmed with a citizens’ veto vote in June, violates the U.S. Constitution. They are arguing that Poliquin should either be declared the winner based on the fact he won the plurality of votes in the first round of counting or that there should be a special election, or runoff, between Golden, a Democrat, and Poliquin, a Republican.

“A tremendous number of voters expressed confusion over the new process where they voted one type of ballot for state races and another type of ballot for federal races which resembled an excel spreadsheet where they could make a 2nd, 3rd, 4th or even a 5th choice, adding a write-in,” Littlefield added:

Rank Voting claims to produce a winner with majority support, over 50%, but the fact is the system is not designed to do so. If no candidate receives 50%+1 on Election Day the rank voting system is engaged. However, moving forward the last place candidates ballots are “spoiled” or eliminated if there is no additional ranking for other candidates… therefore the total number of voters is reduced by the computer and the eventual winner does not actually get 50%+1 of those who turned out on Election Day. This makes this system very different from normal runoff states like Louisiana. Here the computer algorithm determines the final ballot.

Only those voters who voted for last place finishing candidates have their additional choices considered. Surviving candidates ballots simply stay in the mix. Those voters do not get the option to “ponder” their choices like the others in subsequent voting rounds by the computer system.

Littlefield also added that, “The computer software was declared proprietary and the Secretary of State has refused to allow an inspection of the software or algorithm.”

Democrats and their allies spent more than $20 million to defeat Poliquin. Should he win the recount or the pending lawsuit, he will be the only Republican member of the House of Representatives in the 116th Session of Congress from the six states that comprise New England–Maine, Massachusetts, New Hampshire, Vermont, Rhode Island, and Connecticut.