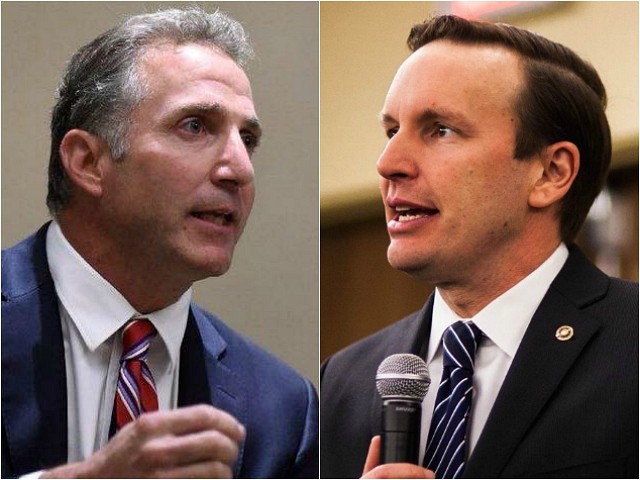 GOP U.S. Senate candidate Matthew Corey – who is facing incumbent Sen. Chris Murphy of Connecticut – says “Medicare for All will destroy over 68,000 jobs” in the state.

Corey responded to Democrat Murphy’s statement last week that, since President Donald Trump was inaugurated, he and his administration have been trying “to destroy the protections in the [Affordable Care Act] for people with pre-existing conditions.”

Murphy said in the tax reform bill, “Republicans passed a partial repeal of the Affordable Care Act that would knowingly result in 13 million people losing health insurance and driving premiums up by double digits.”

The senator then accused Trump of trying to push “junk” health insurance plans on Americans and “trying to sabotage and destroy our healthcare system.”

Murphy has expressed support for both Obamacare and a Medicare for All health insurance system.

“Sen. Murphy has to make up his mind,” Corey, the senator’s opponent, told Breitbart News. “Does he want to salvage the ACA or go to single payer?”

A small business owner, Corey said, “Medicare for All will destroy over 68,000 jobs here in Connecticut.”

A recent study by the Mercatus Center at George Mason University found the “Medicare for All” socialized medical plan promoted by Sen. Bernie Sanders would cost $32 trillion over the next ten years if enacted.

“Sen. Murphy still doesn’t say how he will pay for it,” Corey said, adding:

He claims these new policies are junk policies. What Trump did was give people a choice. They aren’t being forced off the insurance (the high premiums that Obamacare caused are doing that). They are given the choice to drop coverage or purchase alternatives. He can call them “junk plans” all he wants, but the people I’ve been speaking to are telling me that plans have been costing them more than their mortgage (some as high as $3000 a month or $36,000 a year) with no coverage for illness until they pay another $5K-$10K out of pocket for a deductible. To me – these are junk.

Breitbart News reached out to the senator’s office to clarify his preference for a health insurance model.

The senator’s spokesman said Murphy “would prefer a Medicare For All-like system if he were designing a health care system from scratch.”

In April,  Murphy joined other Democrats in introducing his Choose Medicare Act which would allow individuals and employers the choice to purchase a Medicare plan.

“People in Connecticut love Medicare,” Murphy said in a statement about the government-run system.

“It’s popular, it’s patient friendly, and it’s cost effective,” the senator added. “Our belief is that the Medicare plan will be the most affordable and the most efficient, but we can’t know that unless everyone is given the choice to purchase a Medicare plan.”

Corey vehemently disagrees and says Trump is “on the right track.”

“The president is having small businesses and sole proprietors join together across state lines and negotiate like larger companies,” Corey explained. “Maine – along with other States – has set aside funds for people with preexisting conditions. They are reforming healthcare to bring the costs down. We also spend $360 billion on duplicate administrative costs.”

Corey added that he has requested to debate Murphy on issues such as health care.

“Chris Murphy ignored my previous requests and is clearly hiding from both me and the voters of Connecticut,” he said in a recent press statement.

Breitbart News reached out to the Murphy campaign for comment on the status of debates with Corey but did not receive a response.