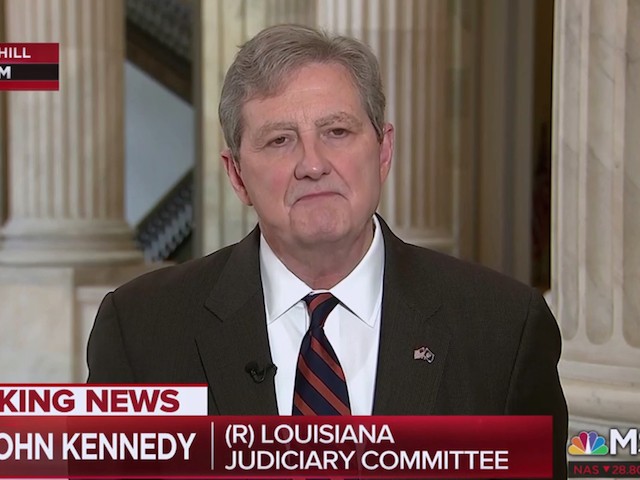 Wednesday on MSNBC’s “Live,” Sen. John Kennedy (R-LA) said the United States had to be measured in our response to Saudi Arabia over the disappearance and possible killing of Washington Post columnist Jamal Khashoggi.

Kennedy said, “I think we have to condemn that behavior in the strongest possible terms.”

He continued, “It doesn’t mean we have the blow up the Middle East in order to condemn this kind of behavior.”

Kennedy explained, “There are three power centers in the Middle East: Turkey, Saudi Arabia and Iran. All three are run by authoritarians. They are all three rivals. They don’t like each other. They are all jockeying to get the upper hand in the Middle East. As soon as one of those gets the upper hand, there will be war in the Middle East. We have no relationship with Iran. We’ve tried. They are probably the most aggressive. We do have a relationship with Saudi Arabia. We have a relationship with Turkey. It needs to get better. You can work with a country to try to establish world order without affirming their values. I think the people who say we’re shocked that the Saudis did this—well number one, Saudi Arabia has never been a budding democracy, it’s an authoritarian regime. You can say they did it, so we’re not going to have anything else to do with them. Well, fine, if you want to have a powder keg and the Middle East blow up. I just think it’s a very unrealistic view of the world.”

As examples of consequences, Kennedy said, “You can expel diplomats, you can impose sanctions, you can curtail arms sells. I don’t agree with my colleague who is saying we need to terminate all discussion with Saudi Arabia. If you do that, and you tip the balance of power in the Middle East, we’re going to have a war.”

He added, “As long as we can talk to two powers, we have a chance to keep a lid on the place. We get to the point where we don’t have any relationships with any of the three and one of them gains the upper hand, you’ll have war in the Middle East and you’ll have a nuclear war because Israel is not going to sit there and watch the country be overrun.”