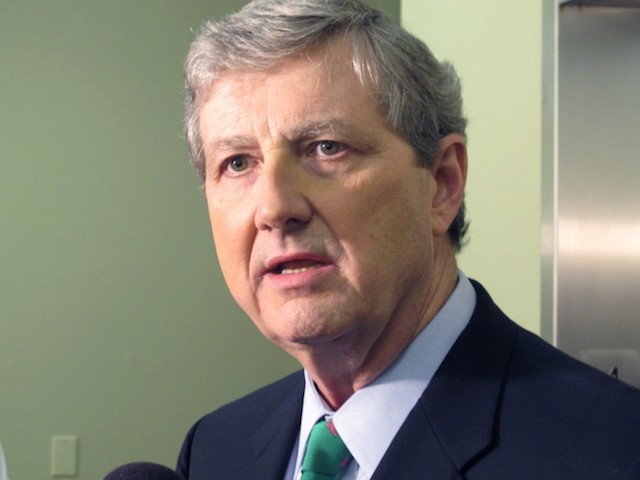 On Monday’s broadcast of the Fox News Channel’s “The Story,” Senator John Kennedy (R-LA) said that while he wants to see what the FBI’s investigation of Supreme Court nominee Judge Brett Kavanaugh turns up, “I have a feeling they’re going to do just what we’ve already done, just what they did six previous times.” Kennedy also reacted to a clip of an interview of Julie Swetnick by stating, “This entire thing makes me want to heave. If you think this is about searching for the truth, you ought to put down the bong.”

After seeing a clip of Swetnick’s interview with NBC, Kennedy said, “This entire thing makes me want to heave. If you think this is about searching for the truth, you ought to put down the bong. This is not about the truth. This is about gamesmanship and power, political politics. It’s just that simple. Ms. Swetnick, there’s no corroboration. She says that she attended ten gang rapes, at which Judge Kavanaugh was supposedly involved. She didn’t report any of them. She is represented by Mr. Avenatti, who has done his dead level best to make all of this about Mr. Avenatti.”

He continued, “I don’t think anybody in the Milky Way could be surprised that the Democrats are yet again moving the goalposts. There is nothing we can do to get our Democratic friends to consider voting for Judge Kavanaugh. The only way to make them happy is to pull him down and I guess dig up Bill Douglas and nominate him, and anybody else who thinks otherwise is just kidding themselves. Look, this is what the Democrats say, they say that Brett Kavanaugh is a rich, drunk, lying, sexual predator. He’s been through six FBI background checks, each of which is a cross between an endoscopy and colonoscopy, and none of this was turned up. Now he’s going through the seventh one, which the Democrats demanded, and we’re not even halfway through, probably, and now they’re unhappy with that.”

Kennedy later added, “[I]t’s time for everybody to woman up and man up and be a senator and cast your vote in front of God and country. [I] fully trust the FBI. I want to wait and see what they turn up, but I have a feeling they’re going to do just what we’ve already done, just what they did six previous times. And by the way, it keeps getting lost in this, the Senate Judiciary investigators did a full investigation. All — the FBI is going to redo what they’ve already done.”

He concluded, “And when we finish with the FBI investigation, the Democrats will argue, well — they’re going to argue he doesn’t have the demeanor. Well, they called him a rich, drunk, lying, sexual predator, and the man took offense to that. And they say as a result he doesn’t have the demeanor to get on — to be on the Supreme Court? They must really think the American people are stupid.”