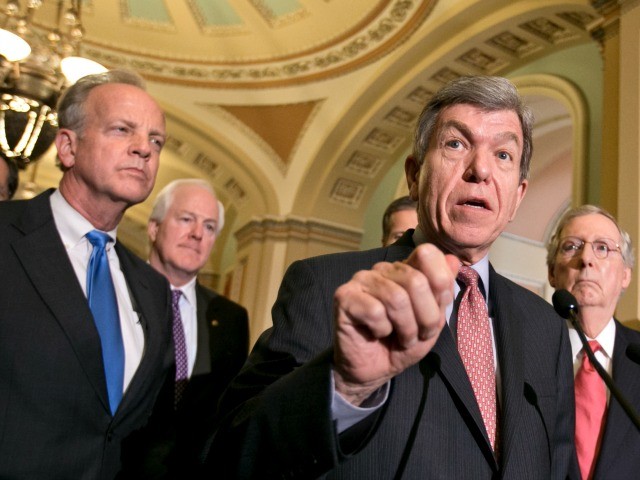 Sunday on NBC’s “Meet The Press,” Sen. Roy Blunt (R-MO) said he had told President Donald Trump “it would be a huge mistake not to let the Mueller investigation come to a conclusion.”

RADDATZ: I want to move also to what Congressman Schiff said about the Mueller investigation and about Whitaker. President Trump weighed in on Twitter this week, “the inner workings of the Mueller investigation are a total mess. They have found no collusion and have gone absolutely nuts. They are screaming and shouting at people, horribly threatening them to come up with answers they want.” They’ve gone absolutely nuts? Have you seen any evidence of that? Do you know what the president’s talking about?

BLUNT: I don’t know what the president’s talking about but I do know that that’s not news that the president would have this view of the Mueller investigation. He has engaged in this in that way from the very start, just like virtually every member of the Senate. And I think most members of the House have engaged, saying “Mr. President, it would be a huge mistake not to let the Mueller investigation come to a conclusion. We need to get beyond this, we don’t need to start – have this starting again.”

RADDATZ: So you have confidence in the Mueller investigation?

RADDATZ: And let’s talk about the acting Attorney General Matt Whitaker. Lindsey Graham just said on another program this morning, I don’t know if he’s the best choice. What do you think about that?

BLUNT: Well, what we need is a permanent attorney general. We need to move as quickly as we can beyond whoever is the acting attorney general to an attorney general that’s going to be there for, hopefully, a much longer period of time. So we’ll see. I don’t know Matt Whitaker well. I’ve known him for some time, met him in Iowa years ago when he was U.S. Attorney. On the occasions I’ve had with him to be — he’s been very responsive and has seen that the Justice Department responded to the things I’ve asked about. So in terms of an acting capacity, he does not — he seems to be a person that has the ability to do that acting job and …

RADDATZ: But not a permanent position; is that what you’re saying?

BLUNT: Well, I would think — I — I would think not. But that’s — the president needs to determine who’s going to be permanently at the Justice Department as soon as he can. Now, you know and I know that one of …

RADDATZ: What are you looking for?

BLUNT: … one of our big challenges in this generally has been that our friends on the other side in the Senate have made it so hard to get anybody confirmed to anything. And so, you know, the president’s unlikely, I think, to make that nomination before the Congress reconvenes and, if he did, we’d be unlikely to be able to do anything with it. We are way beyond the time where you have a hearing and a week later somebody gets confirmed to these jobs, no matter how insignificant they are. And this one, of course, is very significant.

RADDATZ: Just — just tell me what you’re looking for in an attorney general, if not Matt Whitaker.

BLUNT: Well, I think what the president should be looking for in an attorney general is someone who can manage the Justice Department, who understands the far-ranging impact of that Department, hopefully, has had some experience working with or in the Department before that, and …

RADDATZ: And as for the Mueller investigation?

BLUNT: … Well, in terms of an attorney general, you know, the — the big question here on the Mueller investigation, I think, is whether the Congress has any ability to tell the president who can work in the executive branch. That’s a Constitutional question, it’s — it’s different than the question of whether Mueller should be allowed to continue, it’s what could you do about that. You know, this idea that we’d have a debate, and have a vote and put a bill on the president’s desk that he wouldn’t sign. I don’t think that’s nearly as impactful as members continuing to say, Mr. President, we need to get beyond this; you need to let this come to a conclusion. And I think — I don’t have any reason to believe that Matt Whitaker feels differently than that.