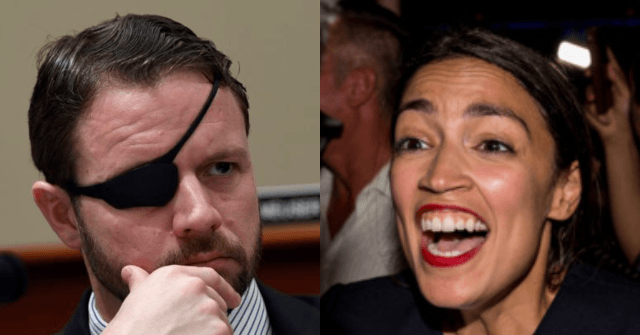 During an interview on Tuesday’s “The Story” on Fox News Channel, Rep. Dan Crenshaw (R-TX) reacted to Rep. Alexandria Ocasio-Cortez’s (D-NY) recent trip to a border detention facility where she claimed detainees were forced to drink from toilets and that she was harassed by border patrol agents.

Crenshaw said Ocasio-Cortez is “getting bolder with her lies” and is not doing anything to fix the problem at the border.

“It’s sad to see, she’s getting bolder with her lies on this,” Crenshaw stated. “People like AOC are operating off of a false premise, and it’s deliberately designed to misinform the American people for her political ends.

He continued, “First there was no crisis at all. Then it was a ‘manufactured crisis,’ then it was a crisis completely created by Trump, then there were ‘concentration camps,’ then people are Nazis. Now she is saying that border patrol agents harassed her and forced migrants to drink out of toilets? This is insanity. This is not true. There is no one else corroborating these kinds of reports.”

Crenshaw said Democrats like Ocasio-Cortez are using the situation at the border to “sling arrows” at Republicans, however, he added that “they are not offering a better solution.”

“They fought us tooth and nail against that $4.5 million in humanitarian aid the president needed, that DHS needed,” he noted.

“I don’t see them offering up any space in their own homes,” added Crenshaw. They are not offering a better solution … what they really want is no enforcement.”