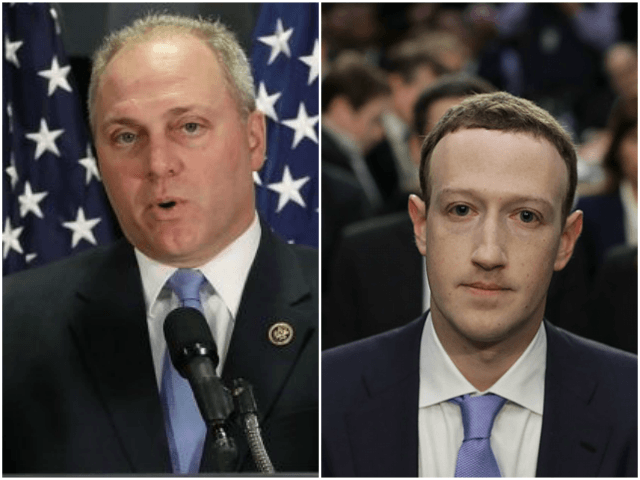 A new op-ed from Representatives Steve Scalise of Louisiana and Cathy McMorris Rodgers of Washington argues that social media companies like Google, Facebook, and Twitter should acknowledge their political biases. Scalise and Rodgers referenced an exclusive Breitbart News video which showed Google executives complaining about the outcome of the 2016 election. Scalise and Rodgers urge the companies to directly acknowledge their political biases and explain how those biases might affect their products.

Add Google to the list of tech companies who owe the American people answers. A leaked video of Google executives surfaced recently that depicts them lamenting the 2016 election outcome. Google co-founder Sergey Brin told employees that he found the election “deeply offensive.” It is clear that left-leaning political bias exists among senior employees at Google. The question remains: How do their personal biases affect their products and choices?

The House Energy and Commerce Committee held hearings with Twitter CEO Jack Dorsey and Facebook CEO Mark Zuckerberg this year to have a transparent discussion about fair and free platforms for the battle of ideas. As members of the committee, we asked questions that Americans are concerned about regarding content bias, harassment, hate speech allegations and personal data privacy.

The GOP leaders go on to condemn social media platforms for their inaction with regards to their use for ISIS recruitment and human trafficking. Scalise and Rodgers then argue that government regulation should not determine what types of speech are acceptable on social media. However, Scalise and Rodgers would like to see social media companies reform themselves by establishing clear and transparent standards for the type of speech that is acceptable on their platforms.

“This will restore trust that users can use these platforms without fear of being victims of violence, or skepticism that what they are seeing is filtered through an ideological lens,” they finish. “It won’t be easy, and we will all be watching, but the future of civil discourse and the public square depends upon it.”