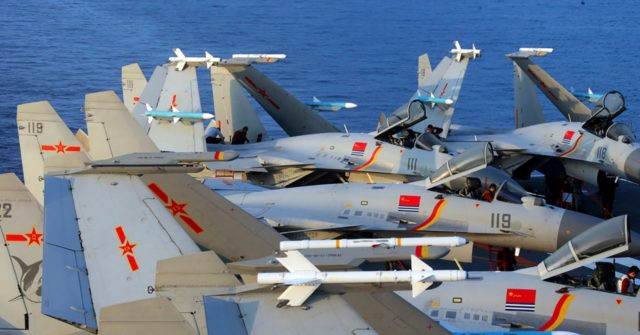 Google on Thursday denied helping the Chinese military design technology that could be used to help China’s next-generation stealth fighters target their weapons after it was revealed that one of Google’s lead artificial intelligence (AI) researchers contributed to a joint research paper with Chinese scientists.

Google confirmed that its AI specialist Shumin Zhai worked with the Chinese Academy of Scientists on the research paper in question, which the academy said would “have broad application prospects in military, medical, education, and digital entertainment.”

The Beijing academy removed the word “military” from this statement after the South China Morning Post revealed the Google employee’s involvement in the project, which the SCMP described as follows:

The research paper, about the development of new computer-human interaction technology, focuses on a smart target-selection assistant that can speed up on-screen mobile target selection by more than 50 per cent and improve accuracy by nearly 80 per cent, the government institute said.

A fighter jet pilot or anti-air missile operator could therefore select fast-moving targets on a touch screen with unprecedented speed and accuracy, according to two mainland researchers informed about the study.

This makes China’s stealth fighter J-20 a candidate to use it, said the two researchers, who declined to be named.

The SCMP quoted an AI weapon researcher working for the People’s Liberation Army who said it was not uncommon for foreign scientists to be recruited or duped into working on Chinese military projects.

“They will have no security clearance to get access to sensitive information, for sure, but it does not matter. What we need is their brain,” the researcher said. “For instance, they can be asked to develop an algorithm but not briefed on the details of how the algorithm would be used.”

Google said the paper Zhai worked on concerned a “very general research question in user experience design of how people interact with moving items on a touch screen” and denied the work has any military applications.

After announcing it would no longer do AI work for the American military, Google opened an AI center in Beijing, even though Chinese Communist Party chief Xi Jinping has made it clear that all civilian projects are also Chinese military projects under the doctrine of “civil-military fusion.”

Google has been accused of working for the Chinese military before, most notably by Chairman of the Joint Chiefs of Staff Gen. Joseph Dunford in March 2019, who said Google had worked on projects “indirectly benefiting the Chinese military” and perhaps even technology with more obvious military applications.

“We watch with great concern when industry partners work in China knowing that there is that indirect benefit. And frankly, ‘indirect’ may not be a full characterization of the way it really is, it’s more of a direct benefit to the Chinese military,” Dunford told the Senate Armed Services Committee.