In an 85-page document recently leaked to Breitbart News, Google refers to President Trump’s claims that Google search results are biased as a “conspiracy theory,” however, there is a large amount of evidence to show that the search engine was biased towards Hillary Clinton during the 2016 election.

Breitbart News published an 85-page internal company briefing produced by Google that argues that for a number of reasons, including the election of President Trump, the “American tradition” of free speech on the internet is no longer a realistic goal. The document makes a number of claims which Breitbart News has been reporting on, but one specific slide from the briefing claims that President Trump’s assertion that Google favored positive search results of Hillary Clinton over negative ones during the 2016 election was a “conspiracy theory.”

The slide alleging that President Trump’s claim is a conspiracy can be seen below: 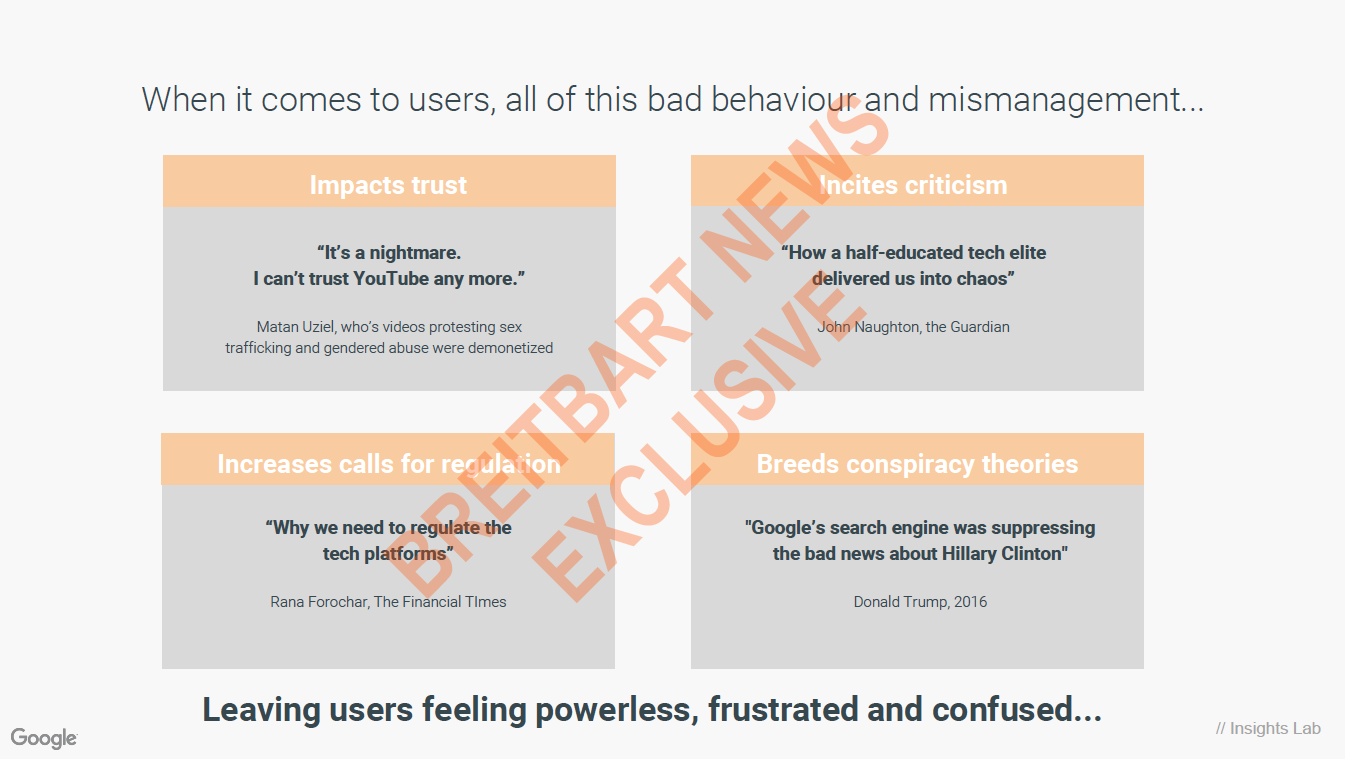 Google’s search engine bias has been an issue that not only Breitbart News has reported on. Studies by Dr. Robert Epstein of the American Institute for Behavioral Research and Technology have shown a significant level of bias in Google’s search results.

A report from Dr. Epstein published in 2016 showed that Google appeared to favor positive autocomplete search results relating to Hillary Clinton during the 2016 election, even when search terms critical of Clinton were actually more popular at the time. Epstein’s report revealed that Google manipulated search results related to Hillary Clinton during the 2016 election that had the potential to “shift as many as 3 million votes” according to Epstein.

Epstein along with his colleagues at the American Institute for Behavioral Research (AIBRT) became interested in a video published by Matt Lieberman of Sourcefed which claimed that Google searches suppressed negative information about Hillary Clinton while other search engines such as Bing and Yahoo showed accurate results.

It is somewhat difficult to get the Google search bar to suggest negative searches related to Mrs. Clinton or to make any Clinton-related suggestions when one types a negative search term. Bing and Yahoo, on the other hand, often show a number of negative suggestions in response to the same search terms. Bing and Yahoo seem to be showing us what people are actually searching for; Google is showing us something else — but what, and for what purpose?

Google tries to explain away such findings by saying its search bar is programmed to avoid suggesting searches that portray people in a negative light. As far as we can tell, this claim is false; Google suppresses negative suggestions selectively, not across the board. It is easy to get autocomplete to suggest negative searches related to prominent people, one of whom happens to be Mrs. Clinton’s opponent.

Epstein then hypothesized that Google directly altered search results in an attempt to influence the 2016 election:

Without whistleblowers or warrants, no one can prove Google executives are using digital shenanigans to influence elections, but I don’t see how we can rule out that possibility. There is nothing illegal about manipulating people using search suggestions and search rankings — quite the contrary, in fact — and it makes good financial sense for a company to use every legal means at its disposal to support its preferred candidates.

Epstein’s report included screenshots of different autocomplete results from different search engines, as can be seen below Google failed to return any negative results about Clinton whatsoever, despite a Google trends chart showing that negative search terms for Clinton were being used more than positive ones:

Similarly, searches for the word “crooked” returned the popular nickname “crooked Hillary” in other search engines but not Google, despite trends showing that it was an extremely popular search term: 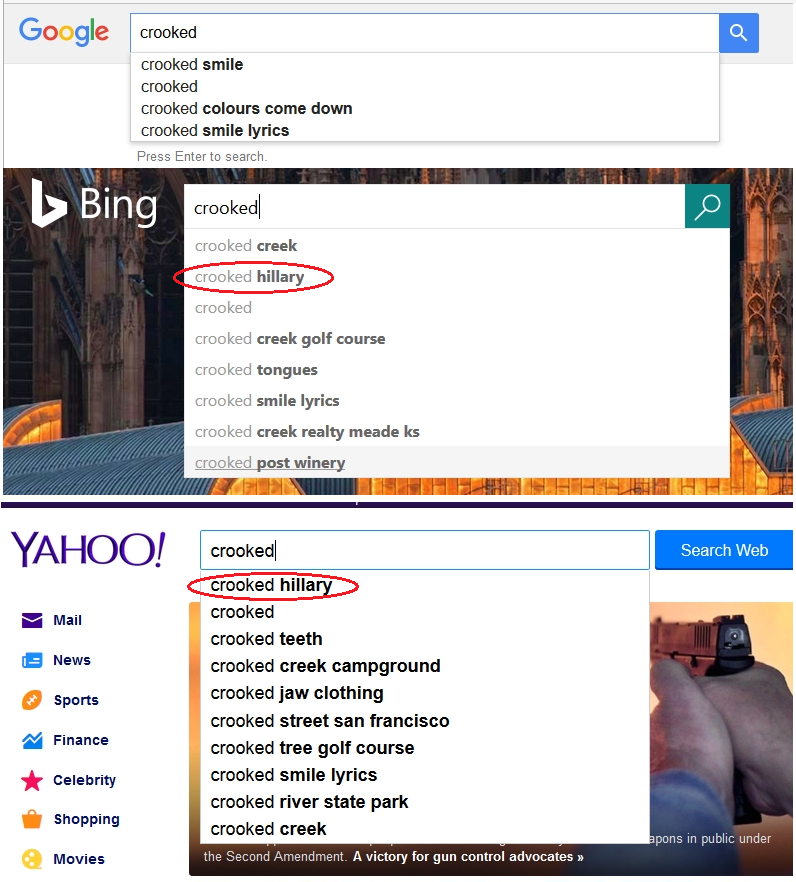 But mainstream media outlets were quick to cover up Epstein’s report, a fact noted by the Washington Examiner in an extensive article. Epstein spoke to the Examiner explaining what happened,  stating: “I wrote a comprehensive article that I originally submitted to Politico. Politico had me make a number of changes I was uncomfortable with, and ultimately some higher up killed the article.” Epstein elaborated: “So I offered it to Sputnik News, but I first made them promise not to change anything to guarantee the accuracy of the report. They agreed to that. They also promised worldwide coverage, which I thought was a good idea.”

Epstein criticized the New York Times for its immediate dismissal of his findings: “I think that the New York Times was irresponsible in dismissing this article without ever looking at it and seeing who wrote it, they simply dismissed a lengthy, detailed, scientific report, just because it appeared in Sputnik, as if someone on Mr. Putin’s staff wrote this.” Far from being a Putin operative, Epstein isn’t even a big fan of President Trump: “I happen to be a Hillary Clinton supporter, which I said in the article,” said Epstein.

Google has long denied any bias in their search results, directly denying claims by President Trump of left-leaning bias:

Google search results for “Trump News” shows only the viewing/reporting of Fake News Media. In other words, they have it RIGGED, for me & others, so that almost all stories & news is BAD. Fake CNN is prominent. Republican/Conservative & Fair Media is shut out. Illegal? 96% of….

….results on “Trump News” are from National Left-Wing Media, very dangerous. Google & others are suppressing voices of Conservatives and hiding information and news that is good. They are controlling what we can & cannot see. This is a very serious situation-will be addressed!

When users type queries into the Google Search bar, our goal is to make sure they receive the most relevant answers in a matter of seconds. Search is not used to set a political agenda and we don’t bias our results toward any political ideology. Every year, we issue hundreds of improvements to our algorithms to ensure they surface high-quality content in response to users’ queries. We continually work to improve Google Search and we never rank search results to manipulate political sentiment.

A Breitbart News investigation also discovered in August that Google News search results appeared to be positioning mainstream outlets above conservative ones. Breitbart News’ Charlie Nash wrote in his article:

Breitbart News conducted its own investigation and discovered that over the first five pages of Google News results for “Trump,” CNN was the most listed outlet, being featured twenty times.

Google has displayed political bias at almost every step, which has only intensified after the election of President Trump according to experts like Dr. Robert Epstein. The latest leaked documents add further legitimacy to reports like Dr. Epstein’s and Breitbart’s previous reporting on these topics, it would appear as if Google’s days of plausible deniability are coming to a close.