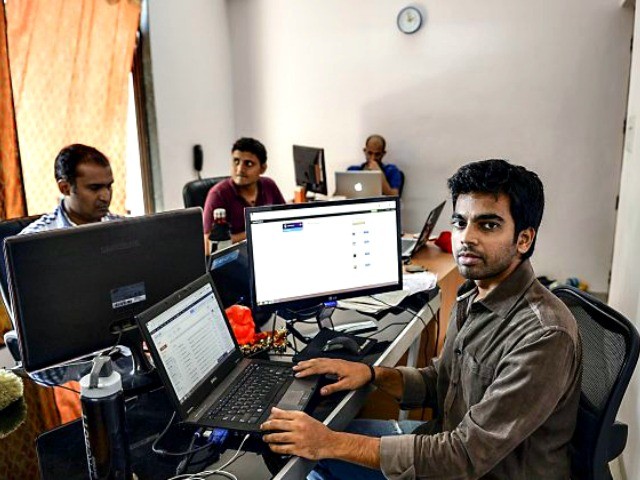 “Much prefer to do that, absolutely,” Virginia Rep. Bob Goodlatte told Jessica Vaughan, policy director of the Center for Immigration Studies, who asked him about the outsourcing plan on December 4.

But the prospects of pro-American reforms depend on Trump’s willingness to balance his demands for border wall funding with continued demands for the legal reforms which will help make the border wall work, he said.

Top Democratic leaders are dangling border wall funding in front of Trump, hoping to win major surrenders, such as a no-strings DACA amnesty for 3 million illegals plus their chain-migration relatives.

GOP leaders are mostly staying silent, which reflects the GOP donors’ passive-aggressive opposition to a border wall that might reduce the migrant inflow of cheap labor and taxpayer-subsidized consumers.

The budget for the Department of Homeland Security is expected to expire mid-December, leaving no funds for several non-enforcement, lower-priority divisions of the agency.  The agency’s enforcement divisions will continue to operate even without an approved budget.

The Senate’s draft version of the 2019 budget includes $1.6 billion for border security, such as extra fences — but no money for Trump’s preferred concrete-and-rebar wall.

The draft House funding bill includes $5 billion in wall funding, but it is packaged with a series of cheap labor and pro-migration amendments sought by business, which is facing growing payroll costs because of Trump’s low immigration policies.

The cheap labor amendments were boosted by the Kansas GOP Rep. Kevin Yoder, who chairs the House appropriations panel on homeland security spending. In July, Yoder added them to DHS budget plan in a failed bid to prevent his defeat in the November election.

One of the most important giveaways is Yoder’s plan to remove the “country caps” on the annual award of green cards.

The pro-diversity caps prevent people from a few countries from getting most of the 140,000 green cards that are annually given to foreign employees by U.S. companies.

U.S. companies have worked with Indian outsourcing companies for so long that they have created a backlog of roughly 300,000 Indian college-graduate workers and 300,000 family members. The workers were imported to take the middle class jobs held by American college graduates, so forcing many American experts out of their careers.

If Yoder’s plan is included in the final 2019 DHS budget, it would effectively put those 600,000 Indians workers and family members on a fast-track to green cards, to the nation-wide job market, and to the voting booth — regardless of the impact on American college graduates and GOP candidates.

Under current rules, roughly 23,000 Indians get green cards each year.

The plan to remove the country caps is being pushed by the Indian visa workers and by Democratic-supporting CEOs.

There is no public opposition from GOP leaders in the House or the Senate or from Trump’s team of business-tied Hill outreach deputies, including a former investment banker, Shahira Knight.

Goodlatte’s call for offsetting reforms came after he said the removal of country caps is good for companies which have hired visa workers, such as the 300,000 Indians and the roughly 70,000 Chinese graduates in the green card waiting line.

Goodlatte, a former immigration lawyer who imported foreign college graduates for General Electric and other companies, said companies are worried that their visa workers could leave the United States and set up competing businesses in their homelands:

If an employer wants to bring somebody here and they’ve been through an American university and have a degree … and the employer needs them and is going to train them in the speicalized work they have, they would rather keep them here and help them become  a permanent resident [by getting a green card] than to have them stay here, become frustrated because they are on a 20-year waiting list, and leave the country, perhaps even bring sections of a company’s business to another business location elsewhere in the world.

The giveaway would also hurt election chances for Trump and the GOP in 2020, partly because it would outsource the jobs of the middle class suburban voters who flipped towards Democratic candidates in November. “First of all, it is suburban voters,” retiring Speaker Paul Ryan said on November 29. “That is the number one liability we experienced.”

Business groups and Democrats tout skewed polls that prod Americans to declare support for migrants and for the claim that the United States is an economy-expanding “Nation of Immigrants,” not a nation of Americans.

The alternative “priority or fairness” polls — as well as the 2016 election — show that voters in the polling booth put a much higher priority on helping their families, neighbors, and fellow nationals get decent jobs in a globalized, high-immigration economy.