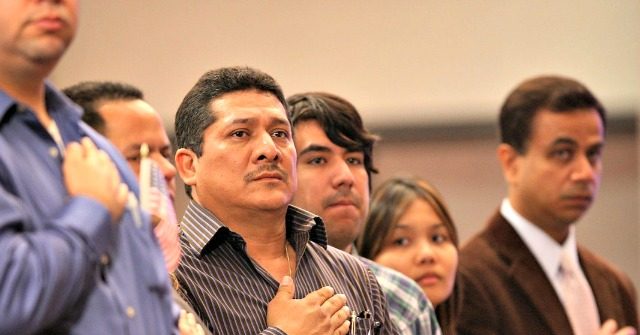 Analysis from Axios this week noted that elected officials are in a “scare” over the nation’s aging population coupled with declining birth rates and no increased incentives for Americans to have children.

The solution, Wall Street executives and open borders lobbyists say, is more legal immigration — that is, increasing the number of legal immigrants that are brought to the U.S. every year. Currently, the U.S. admits more than 1.2 million legal immigrants a year, more than any country in the world, which is  subjecting America’s working and middle class to continuously increased foreign competition in the labor market.

“Earth has plenty of workers to do the jobs we need, just not in the countries where the jobs are right now,” the Axios report by Mike Allen concluded. “Fixing that mismatch is shaping up to be a central political challenge for the upcoming decades.”

The importation of more than a million legal immigrants a year to compete against working and middle-class Americans, Wall Street executives and open borders lobbyists claim, is not enough to mass-replace dying Americans.

A report by JPMorgan Funds Chief Global Strategist David Kelly asserts that the U.S. must increase legal immigration levels beyond their already historically high rates to “supply the economy with extra workers” and thus keep businesses and corporations from having to compete for U.S. workers with higher wages in a tightened labor market.

The longer-term risk of slowing population growth “poses particular economic challenges,” said David Kelly, chief global strategist with JPMorgan Funds, in a recent report. He is concerned policymakers are not addressing the issue, which could hurt the market, especially if some of President Trump’s proposed plans for “merit-based immigration” and increased border security are enacted. [Emphasis added]

That’s why Kelly advises that the United States “should probably be having a serious conversation about temporarily boosting, rather than reducing, immigration, at least while the baby boom is retiring.” [Emphasis added]

Likewise, National Immigration Forum Executive Director Ali Noorani argued in an op-ed for Fox News that the projection of baby boomers aging out of the workforce and thus opening up jobs for younger Americans is “not a sustainable trajectory” and must be remedied through amnesty for illegal aliens and continued mass levels of legal immigration to ensure that businesses are always supplied with a never-ending flow of foreign workers.

The analysis is a version of President George W. Bush’s “any willing worker” ideology, wherein the former president advocated for a temporary visa worker program that would have allowed almost any foreign national wanting a U.S. job to come to the country to compete against entry-level Americans.

Between now and 2035, all growth in the U.S. workforce will come from immigrants and their children. That means that without continuing immigration, our economy would be in big trouble. [Emphasis added]

It’s time for Democrats and Republicans to find common ground around immigration reforms that ensure our workforce grows with our economic and social needs. [Emphasis added]

Above all, immigration reform should send an unambiguous message: The U.S. remains open to those who want to contribute and provide the dynamism that has powered our growth since the country’s founding. [Emphasis added]

The calls for increased legal immigration levels to the country to replace older Americans aging out of the workforce come as economists and financial experts readily admit that automation is set to throw millions of Americans out of the labor market in the coming decades.

Research conducted by the Brookings think tank reveals that about a third of the U.S. workforce could be replaced by automation by 2030. Those most impacted by automation would be America’s working class in food service jobs, production jobs, transportation, and the construction industry.

About 70% of the country’s working class say mass displacement of American workers through automation should be stopped with regulation by the federal government.https://t.co/D5hJXosU1K

Similarly, research by the Center for Immigration Studies’ Steven Camarota has found that immigration has little impact on increasing the working-age population. Camerota’s research finds that if the U.S. implemented an immigration moratorium for the next 40 years, it would hardly have an impact on the number of workers per retirees.

Another study, conducted by the Centre of Expertise on Population and Migration, found that the same results were true in Europe.

“Research has found that even scenarios with unrealistically high increases in fertility (+50%) or double immigration (approximately 20 million every five years) do not have the ability to fundamentally change the European population’s age structure,” the study noted.

As Breitbart News has reported, immigration moratoriums are not uncommon in American history. Currently, there are 44.5 million foreign-born residents living in the country, a 108-year record high. This comes after about four decades of mass legal immigration to the U.S. that, if continued, is likely to hand electoral dominance to Democrats.

Since major changes were enacted in 1965 and in the 1990s to the U.S. legal immigration system — changes that allow foreign nationals to bring as many foreign relatives to the country as they want — legal immigration levels have continued booming for more than five decades.

The nation’s Washington, DC-imposed mass legal and illegal immigration policy — whereby at least 1.5 million unskilled foreign nationals are admitted to the U.S. every year — is a boon to corporate executives, Wall Street, big business, and multinational conglomerates, as America’s working and middle class have their wealth redistributed to the country’s top earners through wage stagnation.

Research by the National Academies of Sciences, Engineering, and Medicine has discovered that immigration to the country shifts about $500 billion in wages away from working and middle-class Americans toward new arrivals and economic elites.

In the last decade alone, the U.S. admitted ten million legal immigrants, forcing American workers to compete against a growing population of low-wage foreign workers. Meanwhile, if legal immigration continues, there will be 69 million foreign-born residents living in the U.S. by 2060.