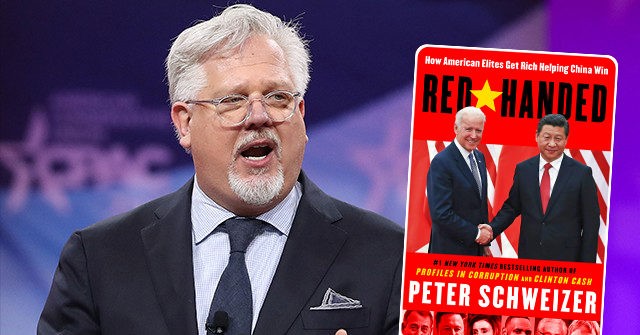 Glenn Beck said on Wednesday’s edition of his eponymous radio program that Peter Schweizer’s latest book, Red-Handed: How American Elites Get Rich Helping China Win, reveals how President Joe Biden “is compromised on almost every front” with respect to his family’s financial ties to China and the Chinese Communist Party (CCP).

Beck interviewed Schweizer, president of the Government Accountability Institute and host of the Drill Down podcast, about some of the book’s revelations. He contrasted false left-wing news media and Democrat narratives of former President Donald Trump’s “compromise” by the Russian government with the Biden family’s dealings with China. Beck said:

We have a president who is compromised on almost every front. [Joe Biden] says that Donald Trump was compromised by Vladimir Putin, except everything that Donald Trump did with Vladimir Putin did not work to Putin’s advantage. Here, the case is dramatically the opposite, but we’re living in a time now where — because of China and because of Biden — the press isn’t going to [cover this information].

This is the most stunning, illegal, clearly un-American activity I have ever seen produced outside of the guy who was actually a [Soviet] spy for the FBI. … It’s that kind of level, and no one’s going to talk about it. Nothing’s going to happen.

Red-Handed explains why U.S. elites often say and do things beneficial to the CCP, Beck said.

“Why does it feel like no one will take China on?” he asked. “Why is it that all of these elites are torpedoing us in favor of China?…Peter [Schweizer] has the answer. It’s called ‘Red-Handed.’ The new book Red-Handed outlines the answer to these disturbing questions.”