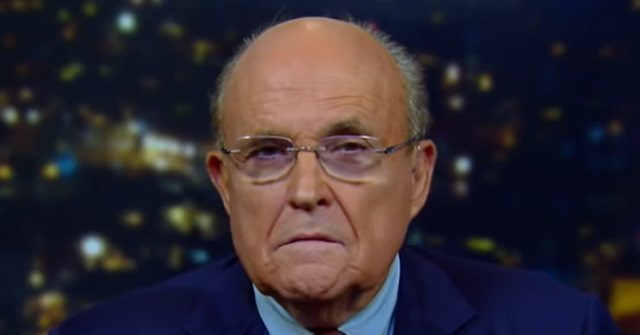 Giuliani told Fox Business Network’s “Morning with Maria” that given the current city administration’s mishandling of the situation, de Blasio should step down as mayor.

“One of the worst days in New York,” he said. “Last night was unnecessary and horrible, and the destruction done to New York City without any interruption by the mayor, you could say the police department, but the mayor is holding them back, and it’s outrageous. I mean, this action did not have to happen if we had a vaguely competent mayor. This should have been stopped five days ago. I mean, couldn’t they have stopped some of that? We have watched now over and over again people looting, throwing Molotov cocktails, burning cars, and now putting our police in prison — in — in hospitals and virtually no major arrests are made. The mayor should step down. He is incompetent.

“We are losing a tremendous amount of property, we are seeing people damaged and hurt seriously, and pretty soon we’re going to lose some lives if this man doesn’t get out of the way and let someone activate the police department,” Giuliani continued. “In other cities, they’re activating the National Guard. In New York City we have to activate the New York City Police Department, they’re — they’re being used as punching bags. And then he has the audacity to criticize them for being too brutal. I mean it — it — we’re in some kind of a world of his own, some insane world that he lives in. He’s been a terrible mayor for six and a half, seven years, terrible. There isn’t a person in this city that will tell you that he hasn’t been a terrible mayor. But now we need a vaguely competent mayor because people are going to die if this man doesn’t get out of the way and let the police department do its job.”