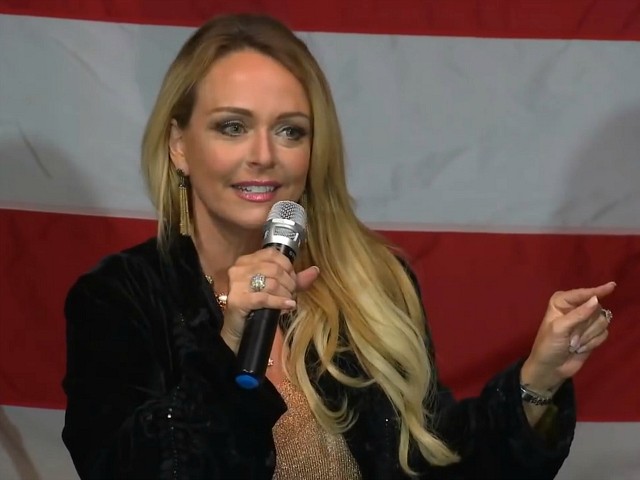 Loudon told the crowd she could not be more excited to be there with them because for her “this movement started about the time Barack Hussein Obama became President of the United States.” At that time, Loudon’s husband was a Missouri State senator.

She said she decided she could not hide in the background anymore “the minute [she] heard Obama was taking 20 percent of [the U.S.] economy and turning it over to socialized medicine through Obamacare.”

“I took a look at all of the so-called Republicans at that time, and I said, ‘I’m not you. I don’t know what I am, but I’m not you,’” she said. She called it her own little walk away moment.

“We are just inviting people just like us to do just what we did, right?” she said.

“This president has had one major accomplishment every 36 hours of his presidency, and that’s with zero help from the media, from the Democrats, and, frankly, from most of the so-called Republicans,” said Loudon.

“You all know who the original walk-awayer is, right?” Loudon asked the crowd. “Donald J. Trump walked away. He led the pack. He started the trend.”

Straka organized the Walk Away movement and Saturday’s rally, encouraging Americans to walk away from the Democrat Party.

Loudon said the current president may be the “most sound-minded individual to ever occupy the Oval Office,” contrary to the narrative in Bob Woodward’s book, as she said she points out in her new book, Mad Politics. She called out the media hype of Trump-Russia 2016 collusion claims, Stormy Daniels’ allegations, Brett Kavanaugh’s hearings, and bomb threats blamed on the president. She said their next ploy is to say the president is crazy.

Loudon pointed back to early in Trump’s 2016 presidential campaign when he made time for all of the citizen journalists, not just the big mainstream media networks all the other candidates made time for. She told the crowd it should show them everything they need to know about Trump’s commitment to them, as he spent two hours giving interviews to those citizen journalists.