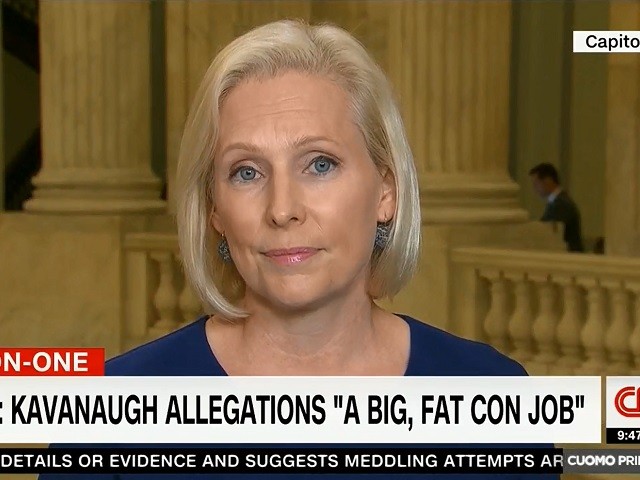 On Wednesday’s broadcast of CNN’s “Cuomo Primetime,” Senator Kirsten Gillibrand (D-NY) stated that she’s not open to changing her mind on Judge Brett Kavanaugh, she thought Kavanaugh’s record was disqualifying before the allegations against Kavanaugh came to light, and “whatever he says tomorrow, it will not change my view. And I’ve already read Dr. Blasey Ford’s testimony and I believe her.”

After Gillibrand stated the FBI should do a complete background check on Kavanaugh in light of the accusations against him, anchor Chris Cuomo asked, “[A]re you open to changing your mind?”

Gillibrand answered, “Based on everything I have heard to date, no. And before these allegations came to light, I thought Judge Kavanaugh’s record was disqualifying. His view on women’s rights, the fact that he doesn’t see women’s reproductive freedom anywhere in the Constitution, the fact that he believes insurers have more free speech rights than you and I, if you have a preexisting condition, they should be able to charge you whatever they want, the fact that he believes my boss should decide whether I have access to contraception, all of those things, to me, are disqualifying. Because his views are so far outside the mainstream, so conservative, that I can’t imagine him being a force for good on the court, and I can’t imagine him actually having the kind of judicial character that is necessary to be a justice on the Supreme Court. Then you just add to that all these allegations. So, no, whatever he says tomorrow, it will not change my view. And I’ve already read Dr. Blasey Ford’s testimony and I believe her.”