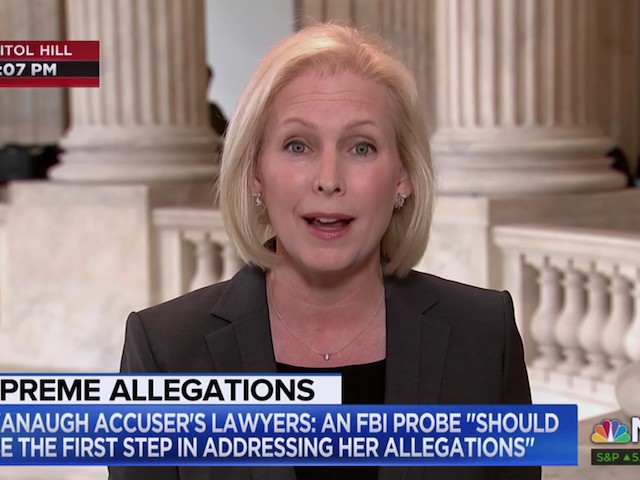 Wednesday on MSNBC’s “Andrea Mitchell Reports,” Sen. Kirsten Gillibrand (D-NY) said it was “shameful” Republicans were trying to “bully” Brett Kavanaugh’s accuser Dr. Christine Blasey Ford into testifying in a “he said-she said” hearing instead of allowing an investigation which could include more witnesses.

Gillibrand said, “What the Republicans are doing is outrageous. They are creating a false choice. They are trying to bully her into testifying Monday, before a full FBI check is completed. First—nomination for the Supreme Court and any judicial nomination—there is always an FBI investigation. They do it as part of the background check. This allegation is new so they need a thorough, nonpartisan review of the facts so there can be a proper hearing. Unfortunately, they are trying to set up a he said/she said scenario, and bullying her into testifying Monday or not being heard at all.”

She continued, “We are asking for a basic review of the facts. If you are listening to Anita Hill herself, she said that you need to push the pause button to do this nonpartisan investigation before the senators have the information that they need to ask appropriate questions. Make no mistake about this, this is a false choice and they are trying to bully her into testifying against her versus Kavanaugh as opposed to calling all of the witnesses who have important understanding and knowledge of the events. Even to have Mark Judge, who was in the room, to not be forced to be investigated by the FBI to answer questions under oath and testify under oath is a dereliction of their duty.”

She added, “I have heard my Republican colleagues say that we have to vote now. That is outrageous, and we intend to be here through all of October, and we have time to do this thoughtfully, and to do it precisely and to be fair to this witness, and what they are doing today is nothing short than shameful.”