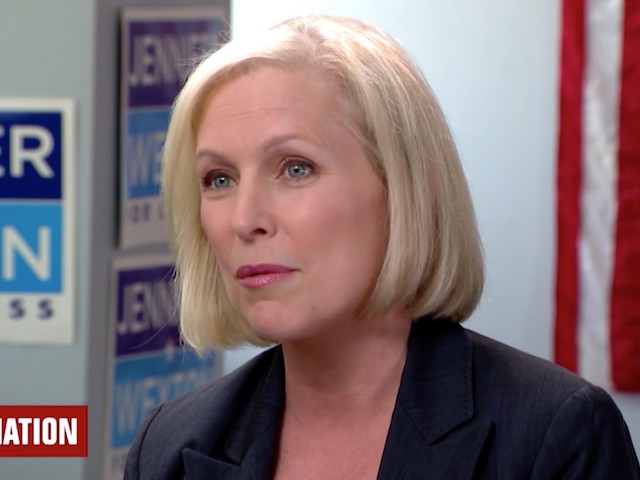 Gillibrand said. “I believe Dr. Blasey Ford because she is telling the truth and you know it by her story, by the fact she told her therapist from five years ago. It was documented at the time. We have the therapist’s notes. She told her husband. This is a trauma she has been dealing with her whole life. She doesn’t want to be in a bedroom that doesn’t have two doors. People knew that about her a long time ago. They told a friend a year ago before Kavanaugh was ever named. These are the hallmarks of truth. These are the hallmarks of someone who has to be believed.”

She continued, “She fears if this person is confirmed he will do terrible things for American women. She is concerned he doesn’t have the character, the integrity, the honesty to be a Supreme Court justice. I believe her because she’s telling the truth. She’s asking the FBI to investigate her claims. She’s asking for that kind of review, that investigative work, that oversight and accountability, because she’s telling the truth. Someone who is lying does not ask the FBI to investigate their claim. Who is not asking the FBI to investigate these claims? The White House. Judge Kavanaugh has not asked the FBI to investigate these claims. Is that the reaction of an innocent person? It is not. We have to get to the bottom of these claims before we put someone on the Supreme Court for life. I’m very concerned that they are unwilling to get to the bottom of this, don’t want the facts. Even the Anita Hill hearing had an investigation, an FBI investigation, of her allegation in advance of the hearing. She had 22 witnesses, some of them corroborating witnesses. Those things are not being afforded Dr. Blasey Ford. They are the basics. This is not something that’s debatable or negotiable, or we only do it sometime. A background check is required for all judicial nominees, especially the Supreme Court, but they can’t complete that background check if they don’t investigate these claims. Right now we have an incomplete background investigation by the FBI.”

She added, “She is not asking for extraordinary measures. She is asking for basic fairness. This is about basic fairness. I do hope the American people, I do hope every woman in America is paying very close attention to what is happening in this body, in the U.S. Senate, today. This is not 1991 and how dare them not even afford the basic courtesies that were afforded them. They are not giving her an option. The option is show up Monday or don’t show up at all. I consider that to be bullying. I consider that to be disregarding. I consider that to be something set up for failure. They would like a he said/she said scenario. Because you know what happens in those scenarios? The men are typically believed. You see those issues through your own lens. Why not have the witnesses? What are they afraid of? Why not have the therapist come in, her husband come in, her friend come in? Why not have Mark Judge testify under oath to the FBI and in front of the committee. What are they afraid of? What is this White House afraid of? What is this president afraid of? What is the U.S. Senate afraid of?  What are the Republican members of the judiciary afraid of? Those are the questions we need to ask today.”