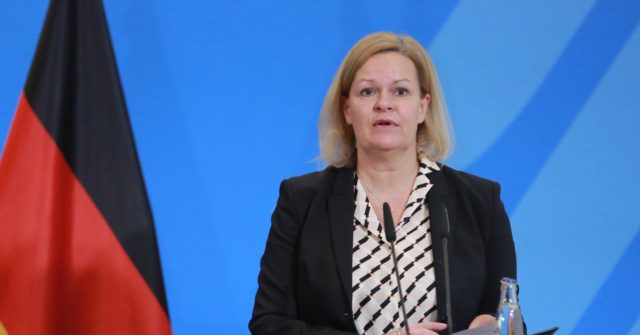 Germany’s Minister for the Interior, Nancy Faeser, has reportedly backtracked on previous threats she made against the popular messenger app Telegram, which is frequently used to organise lockdown protests in the Federal Republic.

Nancy Faeser, Germany’s current Minister for the Interior, has distanced herself from previous threats she made against the popular encrypted messaging service, Telegram.

The app has proved popular amongst the so-called “lateral thinker” anti-lockdown movement within the country, and is frequently used to help organise and coordinate anti-lockdown protests in the Federal Republic.

According to a report by Der Spiegel, Faeser had previously threatened to block the app from Germany over concerns to do with “hate speech”, as well as “violence and hatred on the internet”.

“To say that in the end we’ll switch off the service – that would be a serious evil for every provider,” the minister said in relation to the threat, which was sparked over the app’s alleged refusal to obey German law.

The minister had also requested for Apple and Google to throw Telegram off of smartphone app stores over the messaging services transgressions, saying that both tech companies had a “social responsibility” to do so.

However, Faeser has suddenly stepped back on her fiery rhetoric, distancing herself from her previous remarks about shutting the service down in Germany.

“Of course it’s not my goal to switch off Telegram,” Der Spiegel reports Faeser as saying on Thursday, instead arguing that she was merely attempting to “increase the pressure” on the company with her shutdown comments.

While Germany’s political class may not approve of the app, the act of shutting off the service in Germany, according to Der Spiegel would be logistically very difficult.

Russian authorities had reportedly tried — and failed — to shut out the messaging service from the country in 2018, resulting in nothing but embarrassment for the Kremlin as the app bypassed restrictions.

Meanwhile, it seems doubtful whether the app will acquiesce to Germany’s demands for moderation, with two fine warnings sent to the company — which is located in Dubai — not receiving any response.

Instead, the Federal Republic has begun looking at more direct approaches to the issue, with Der Zeit reporting that The Federal Criminal Police Office (BKA) has set up a task force to deal with people who break the law on the platform.

“The corona pandemic, in particular, has contributed to people radicalising themselves on Telegram, threatening others or even publishing calls for murder,” said BKA president Holger Münch. “We strive to work with Telegram, but we also take our measures if Telegram does not cooperate.”