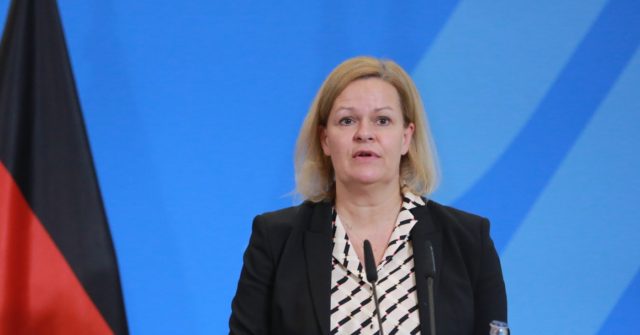 Faeser, a member of the Social Democrats (SPD) who became German Interior Minister last year in December, allegedly penned an article for an Antifa magazine last year run by the Bund der Antifaschistinnen und Antifaschisten (VVN-BdA), a group that has been listed as an extremist outfit for years by the Bavarian Office for the Protection of the Constitution.

The article, which was published in July of last year, however, the existence of the article was, however, only highlighted this week by the German conservative newspaper Junge Freiheit.

The article concerned the 116 letters that were sent to various politicians, activists, artists, and others from August of 2018 to March of 2021, containing death threats and racial hatred.  and signed as “NSU 2.0”.

The letters were signed by “NSU 2.0”, a reference to the National Socialist Underground (NSU), a neo-Nazi terrorist group that operated from 2000 to 2007 and carried out ten murders, two bombings, and robbed a number of banks across the country.

“Most of the NSU 2.0 letters are full of disgusting right-wing fantasies of the destruction of dissenters. And all this news has one goal: to intimidate those who stand up for tolerance, freedom, cosmopolitanism, and the democratic rule of law in public,” Faeser allegedly wrote in the article.

A 53-year-old man was later arrested and charged in connection to the NSU 2.0 letters in October of last year and in her article, Faeser blames the internet saying, “And it’s probably really true that he wrote his disgusting pamphlets without outside help. But he certainly did it in the awareness that he was not alone.”

“Because in order to network, to strengthen each other in racial delusion and fascist fantasies, the internet is enough for the right-wing extremists today. This is where the ideological trailblazers meet their useful idiots. There, deluded people become violent offenders,” Faeser is said to have written and added, “Without the internet as a global radicalization machine, the growing right-wing extremism of the 21st century is inconceivable.”

The article continued by saying that the “fight against fascism and right-wing extremism, racism and ethnic ideologies” is part of the “political DNA” of the SDP, adding that it is important to stand “against right-wing ideas, right-wing threats, and right-wing violence. Every day and in every place”.

The VVN-BdA which hosts the Antifa magazine that published the article has long been on the radar of German domestic intelligence, with the Bavarian branch of the  Office for the Protection of the Constitution stating last year that the group had been regarded as an extremist group for years.

In 2019, the Berlin tax office refused to grant the group non-profit status, highlighting the Bavarian report and according to the group’s own federal chairwoman Cornelia Kerth, the group is under observation by intelligence agencies in eleven of the 16 German federal states.

Interior Minister Faeser’s alleged article would not be the first time the SPD has cosied up to Antifa extremists in recent years.

When former United States President Donald J. Trump signalled that he wanted to declare Antifa a terrorist group, several members of the SPD came out to defend Antifa, including SPD co-leader Saskia Esken who stated that she was a member of Antifa herself.

While the Interior Ministry has refused to comment on Faeser’s article,  Martin Hess of the populist Alternative for Germany (AfD), told Junge Freiheit, “Only a few months before her appointment as Federal Minister of the Interior, Nancy Faeser demonstrated her closeness to the Antifa milieu with this publication.”

“Like the magazine’s editors who are influenced by left-wing extremism, it defames all positions as fascist or right-wing extremist that deviate from the left edge of the political spectrum in a communist manner,” Hess added.

Antifa far-left extremists have called for the murder of 53 members of the populist Alternative for Germany (AfD), publishing their home addresses on a well-known far-left web platform. https://t.co/fOG54eYjRK