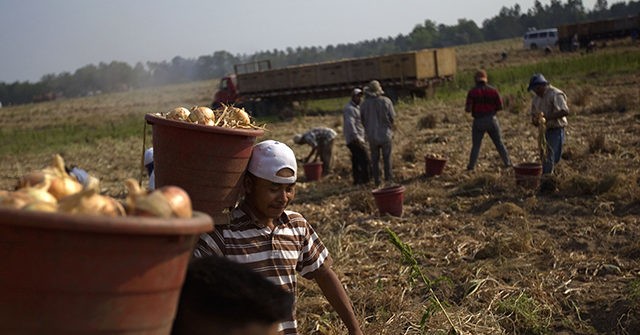 The Georgia Republican Party is set to pass a resolution asking President Trump to impose a full immigration moratorium while about 30 million Americans remain jobless due to the Chinese coronavirus crisis.

Those visa categories represent millions of U.S. jobs that are outsourced every year to imported foreign workers in the STEM fields, the nonagricultural industry, white-collar industries, and summer work programs that would otherwise go to America’s working and middle class.

Now, the Georgia GOP is set to be the first state party to support a full immigration moratorium. Currently, Georgia has an unemployment rate of nearly 12 percent — only slightly lower than the national average.

WHEREAS, President Donald J. Trump has issued an executive order limiting immigration into our country during the present health and economic crisis; [Emphasis added]

NOW THEREFORE BE IT RESOLVED that the Georgia Republican Party commends and supports President Donald J. Trump’s leadership in protecting American jobs during the pandemic by restricting immigration during the present health and economic crisis. [Emphasis added]

BE IT FURTHER RESOLVED that the Georgia Republican Party urges President Trump to issue a second executive order that removes the various special interest exceptions to the first executive order and shall strictly limit new immigration visas until the economy reaches its pre-pandemic unemployment rate of no greater than 3.5 percent. [Emphasis added]

Set to be passed this week, the urge for an immigration moratorium has overwhelming support, about 93 percent, from members who responded to a poll of party delegates.

The resolution is the first time in recent memory that a state Republican Party has joined the overwhelming majority of the GOP electorate in supporting reductions and a halt on immigration.

For years, Republican voters have told pollsters that they support major reductions to immigration and, at times of high unemployment, support no net immigration. Young Republicans tend to be the most skeptical of immigration.

Conversely, the donor class and big business lobby have asked Trump not only to continue the visa pipeline but expand legal immigration, claiming there is a labor shortage.

As Breitbart News has chronicled, the nation’s mass importation of foreign visa workers helps redistribute and shift hundreds of billions in wealth to blue states, already prosperous metropolises, and the richest of Americans.

Every year, the U.S. admits about 1.2 million legal immigrants on green cards to permanently resettle in the country. In addition, another 1.4 million foreign workers are admitted every year to take American jobs. Often, Americans are fired and replaced by foreign visa workers. Many are forced to train their foreign replacements.