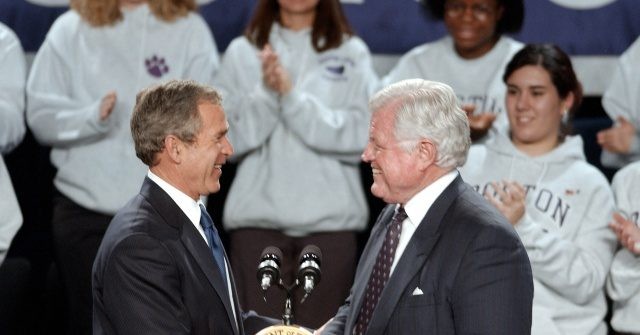 A program created by former President George W. Bush with the help of the late Sen. Ted Kennedy (D-MA) helped blow open the door for widespread fraud among Iraqi nationals in the United States refugee system.

In January 2021, the State Department suspended the Bush-Kennedy Direct Access program, which sought to put Iraqis on a fast-track for refugee resettlement so long as they claimed to aid the U.S. armed forces after the Bush administration’s invasion of Iraq in March 2003.

Most recently, Iraqi national Aws Muwafaq Abduljabbar pleaded guilty in federal court to conspiracy to commit refugee fraud by operating an international scam ring with two other foreign nationals who worked for the United States Citizenship and Immigration Services (USCIS) at overseas consulates.

An unsealed indictment against Abduljabbar, Haitham Isa Saado Sad of Jordan, and Olesya Leonidovna Krasilova of Russia alleges that the three operated the scam from February 2016 to April 2019.

Abduljabbar, the indictment claims, paid Sad and Krasilova for hundreds of refugee case numbers which he would then use to help Iraqi nationals fraudulently, and often successfully, secure refugee status in the U.S.

Sad previously pleaded guilty while Krasilova has yet to be located and arrested.

The case shows the extent to which the Bush-Kennedy program was rife with fraud and abuse. Last year, Breitbart News detailed State Department data that revealed that some 4,000 Iraqi nationals fraudulently filed claims for refugee status in the U.S. — 500 of which have already been resettled in American communities.

Bush created the Direct Access program after signing a Department of Defense (DOD) budget in February 2008 that included the authorization of the program. After failing to get the program, alone, passed through Congress, Kennedy slipped the program’s authorization into the DOD budget.