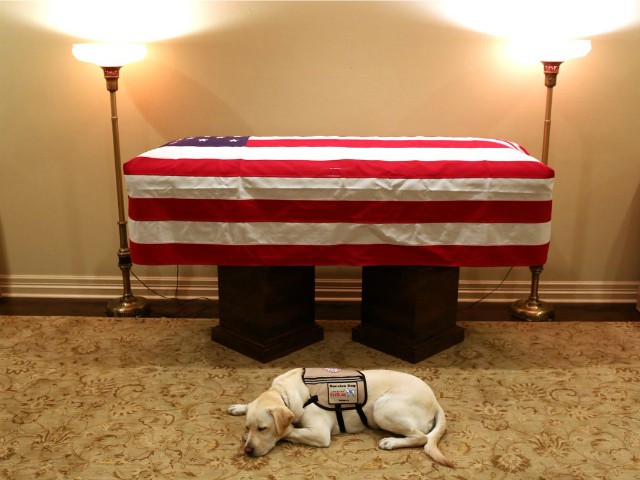 A golden Labrador began his final mission as a service dog to former President George H.W. Bush on Sunday, sleeping next to the 41st president’s casket in a heartwarming tribute.

The photo has since gone viral on Twitter, Facebook, and other social media platforms. The original photo gained more than 120,000 likes and had been shared at least 32,000 times as of Monday morning.

Sully, a Labrador retriever trained through the nonprofit America’s VetDogs, began serving Bush on June 25 and kept the 41st president company in the months after his wife, former first lady Barbara Bush, passed away.

Bush sent out a tweet in June thanking the organization for the dog and praising its commitment to helping veterans:

A great joy to welcome home the newest member of our family, “Sully,” a beautiful — and beautifully trained — lab from @AmericasVetDogs. Could not be more grateful, especially for their commitment to our veterans. pic.twitter.com/Fx4ZCZAJT8

Sully will complete his service to the former president after traveling aboard Air Force 747— which is usually Air Force One when the current president is aboard the flight— with Bush’s casket:

Sully will travel tomorrow on the Air Force 747 (usually Air Force One) with President Bush’s casket.

A very good boy, with a very good man https://t.co/bHufv4oQ5Z

Once Sully’s service to the former president is complete, he will continue as a service dog, assisting veterans at Walter Reed National Military Medical Center.