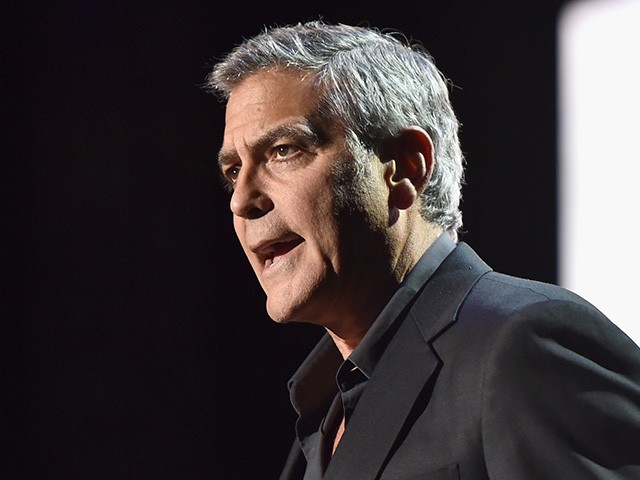 Nothing was off the table at Variety magazine’s Power of Women luncheon held in Beverly Hills on Friday, almost exactly a year since The New York Times and The New Yorker published accounts from dozens of women alleging sexual misconduct by the once-powerful movie mogul Harvey Weinstein. In his remarks before attendees, actor and immigration activist George Clooney admonished what he called the Trump administration’s culture of fear.

George Clooney, who announced himself to a packed ballroom at the Beverly Wilshire Four Seasons in Beverly Hills as “Amal’s husband,” quickly struck a serious tone, accusing the President Donald Trump of using fear to divide Americans.

“Fear of Muslims. Fear of immigrants. Fear of minorities. Fear of strong women,” George Clooney began. “And because our government needs us to be afraid, the question is, are we really scared of all the things that actually make America great? And if the answer is yes, then we’ll have history to answer to. Because these are the ideas that will define us for generations.”

“After all the jokes, and insults, and reality show frenzy, what will be remembered, what will stand the test of time is holding responsible these wolves in wolves’ clothing,” Clooney continued.
“When you call an entire religion your enemy, you might very well make an enemy out of an entire religion. When you tell a whole race of people that you value them less, you can’t be surprised when they question your values,” the Ocean’s Eleven star added. “When you tell women that coming forward to testify about their abuse is a joke, don’t be shocked when they’re standing on your lawn, laughing on Nov. 7.”

In addition to criticizing the Trump administration, the actor lavished praise on anti-2nd Amendment activist and March for Our Lives leader Emma Gonzalez. “She made us listen to her heart,” he said. “A heart that believes that we as a country can be so much better. A heart that called for adults to act like adults so children don’t have to.”
Gonazelz, wiping away tears, said to the women in her own speech: “You know that you are forces to be reckoned with. You can and have inspired peace and understanding and most importantly right now, you can inspire your audience to vote. Now more than ever, women need to continue to rise up.”

In a commanding 15-minute speech, actress Natalie Portman addressed the underrepresented women in all industries and laid out guidelines to incite change, such as donating to Time’s Up, opting against depicting violence against women in films, and hiring women for positions they’re not typically considered for. She was being recognized for her humanitarian efforts in co-founding Time’s Up, a legal defense fund that was created following the rise of the #MeToo movement to address and combat inequality in the workplace.

“Be embarrassed if everyone in your workplace looks like you,” Portman said.

Portman said Weinstein is “still free” because “our culture protects the perpetrators of sexual violence, not its victims.” She added that the Time’s Up defense fund has served more than 3,500 people from “workers at McDonald’s to prison guards to military personnel to women in our own industry who have faced gender-based harassment, coercion and assault.”

The event, presented by Lifetime, with sponsors such as Audi, Morocco Oil, and The Venetian Resort, honored Tiffany Haddish, who spoke about the non-profit The Unusual Suspects Theatre Company and Participant Media CEO David Linde for helping to make female-focused films from Roma to RBG.