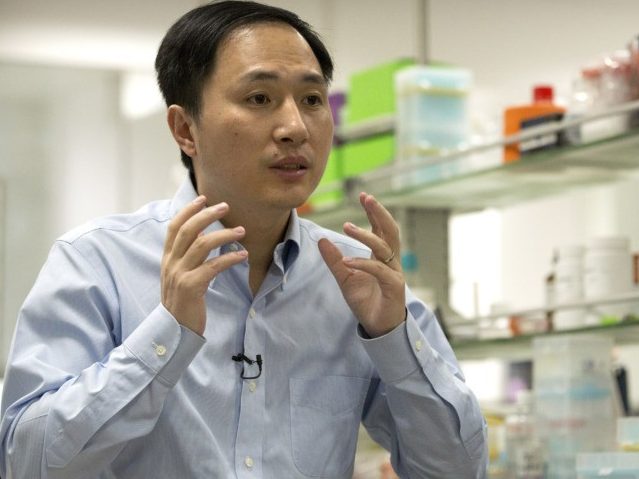 He Jiankui, the Chinese scientist who stunned (and horrified) the world by claiming he edited the DNA of unborn children to make them immune to HIV, is reportedly in state custody and may face the death penalty for his actions.

He Jiankui made headlines at a Hong Kong biomedical conference in November by claiming he altered the DNA of twin girls with an HIV-positive father to make them immune to the virus. Six more pregnant couples were said to be involved as volunteers for his experiments.

He Jiankui’s research was swiftly denounced as “shocking” and “crazy” by much of the Chinese scientific community, sharply questioned by doctors around the world, and viewed as a potential violation of international bans on gene-editing live human embryos. The organizers of the conference where he made his bombshell announcement criticized his work as “irresponsible” and “deeply disturbing.”

The gene-editing scientist promptly contracted an acute case of Chinese “justice” and disappeared without a formal arrest or indictment. According to a Sky News report on Tuesday, he has languished in a guarded Shenzhen apartment since November under either house arrest or protective custody. His colleagues say he will be charged with corruption and bribery, which are capital offenses in China.

“China’s vice minister of science and technology, Xu Nanping, told state broadcaster CCTV that his ministry was strongly opposed to the work. At the time he described it as illegal and unacceptable, and added that an investigation had been ordered,” Sky News pointed out, an observation that does not quite explain how He Jiankui ended up charged with bribery instead of violating medical ethics.

“He could be had up on all sorts of charges of corruption and being guilty of corruption in China these days is not something you want to be. Quite a few people have lost their heads for corruption,” geneticist Robin Lovell-Badge of the Francis Crick Institute in London said on Monday.

Lovell-Badge organized the Hong Kong conference at which He dropped the gene-editing bomb, inviting him in the apparently mistaken belief it would teach him humility and self-restraint. One example of He Jiankui’s deficit in both of those characteristics is that he is not really a biologist or geneticist – Lovell-Badge described him as “a physicist who knows a little biology.”

Lovell-Badge speculated the corruption charges against He Jiankui would stem from the methods he employed to get numerous assistants involved with his work. That could be either good or bad news for his associates, who could be seen as either corrupt collaborators or hoodwinked victims of a corrupt research project.

The New York Times published a photo of He Jiankui standing forlornly on the balcony of a fourth-floor apartment at the Southern University of Science and Technology in Shenzhen, the province where many of China’s biggest tech companies are headquartered. Not pictured were the “dozen unidentified men” the Times said are guarding him. His wife has reportedly been seen with him, carrying a baby.

Chinese authorities refused to confirm He Jiankui was the man photographed on the balcony. The mystery men outside his apartment responded to questions by asking, “How did you know that Professor He is here?” The Times had to show the photo to He Jiankui’s business partner and inquire with hotel staff to confirm his identity.

According to the NYT, university staff has been instructed not to discuss He Jiankui or his work and Chinese media have been ordered not to write about him despite the worldwide interest in his experiments.

His partner in founding the Vienomics gene-testing company, Liu Chaoyu, complained about the disruption caused by the surprise gene-editing announcement and ominously described He Jiankui as “extremely irresponsible” and motivated by his quest for “fame and fortune.”

Lovell-Badge also said He Jiankui is “very rich, has a huge ego,” and is driven by his desire to “be the first at doing something that will change the world,” which suggests there might not be an overabundance of friendly witnesses at his prospective corruption trial.

Marching He Jiankui through a corruption trial so he can be swiftly disposed of would frustrate scientists around the world who have serious questions about his work and its ethical implications.

The New York Times noted there have been challenges to his claims of obtaining informed consent from the couples involved in the experiment. Few of his claimed results been verified, a paper he claims to have submitted on the experiment has gone missing, and the current status of the ostensibly gene-edited babies is murky.

For the record, Lovell-Badge was deeply skeptical of the ethics of He Jiankui’s human experiment but fairly confident it worked more or less as claimed, because “if he was going to make this up, he would have made it up much better than this.”