Under questioning from Sen. Marsha Blackburn (R-TN), Milley confirmed he spoke to the Washington Post’s Bob Woodward for his book Peril, coauthored with Robert Costa, as well as Washington Post reporters Carol Leonnig and Phil Rucker for their book I Alone Can Fix It: Donald J. Trump’s Catastrophic Final Year, and the Wall Street Journal’s Michael Bender for his book Frankly, We Did Win This Election: The Inside Story of How Trump Lost.

Milley is a key source for the Woodward and Costa book, detailing his frustration with President Trump and his staff on the handling of the Summer 2020 riots. He also detailed his disagreement with his June 2020 walk with law enforcement officials and President Trump to St. John’s Church outside Lafayette Square after it was burned by rioters the night before. 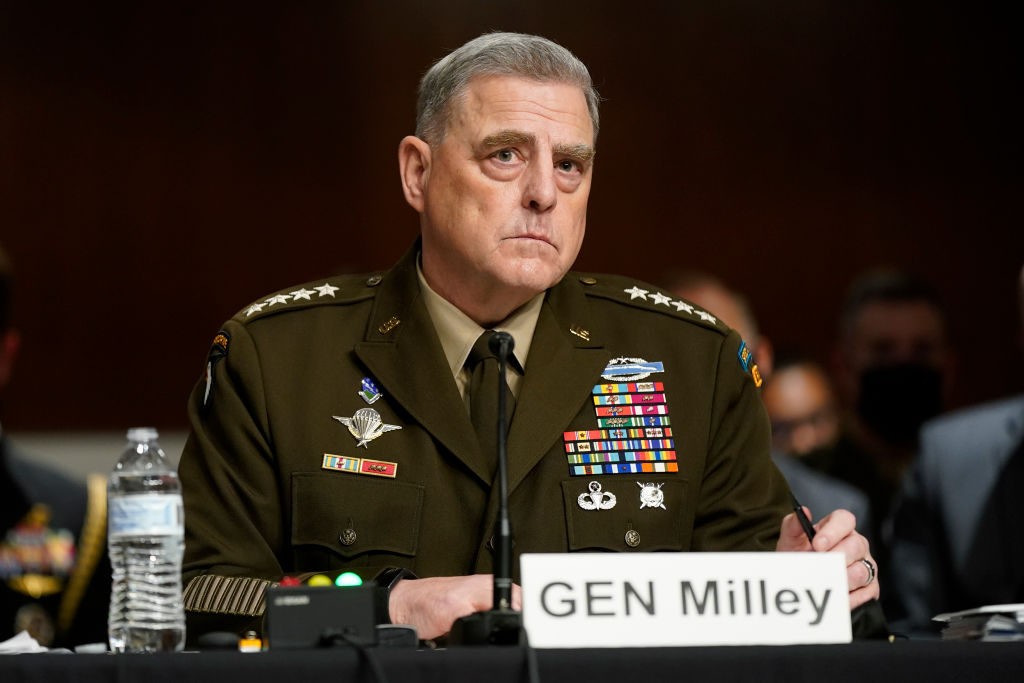 Chairman of the Joint Chiefs of Staff Gen. Mark A. Milley listens to a senator’s question during a Senate Armed Services Committee hearing on the conclusion of military operations in Afghanistan and plans for future counterterrorism operations on Capitol Hill on September 28, 2021 in Washington, DC. (Patrick Semansky-Pool/Getty Images)

He also spoke to Woodward about his actions to reassure House Speaker Nancy Pelosi (D-CA) to prevent Trump from launching a nuclear weapon after the January 6th riots and his promise to his Chinese counterpart to notify China if Trump launched an attack.

When Blackburn asked if the accounts surrounding his actions during Trump’s president were accurate, Milley replied, “I haven’t read any of the books so I don’t know.”

“Let’s have you read the books and then let us know if you are accurately presented and portrayed,” Blackburn replied.

“Absolutely. Happy to do that,” Milley replied.