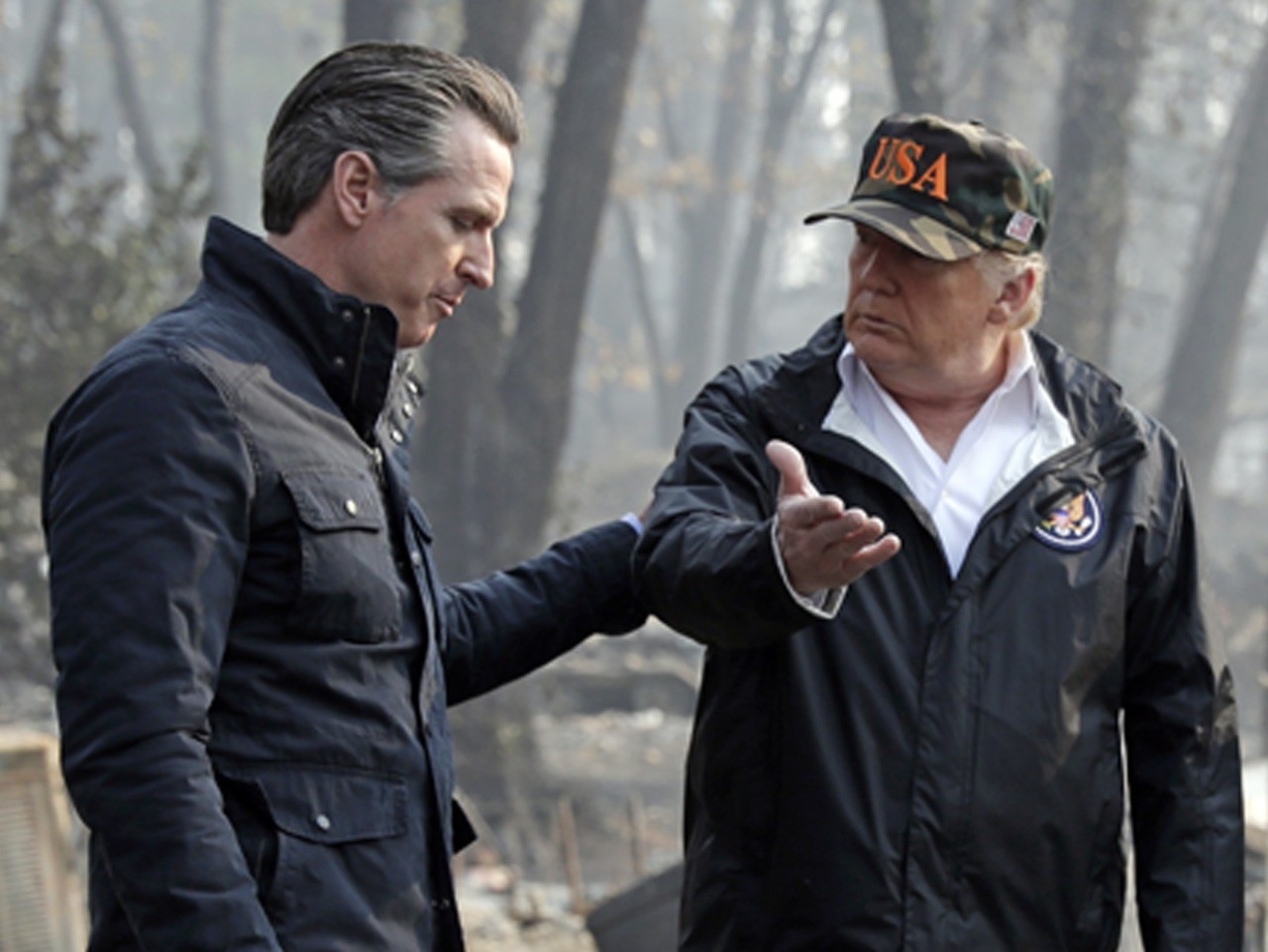 California Governor Gavin Newsom is fighting President Donald Trump over funds to assist with the recent wildfires in the state, after the newly-installed governor used his inaugural address to attack the president.

On Monday, Newsom took the oath of office and then delivered a fiery speech promising to “offer an alternative to the corruption and incompetence in the White House.” It was a gratuitous swipe at Trump that made headlines and seemed to backtrack on the progress the two made during Trump’s visit to wildfire-stricken regions in November.

Trump had criticized California for poor forest management, echoing critics who say that environmentalists have been so successful in pushing the government to restrict logging that they have inadvertently created conditions in which wildfires are likely to spread rapidly through dead trees and dense underbrush, and in which the lack of logging roads makes fighting fires harder. (Democrats prefer to blame climate change, though without evidence.)

Amidst criticism that Trump’s rebuke showed insensitivity to the victims of ongoing fires, as well as first responders battling the blazes, the president subsequently made an extra effort to show his support for the state during the fires. Newsom joined then-Gov. Jerry Brown in welcoming the president on a tour of Paradise, California and other areas.

But on Monday, the detente was over, as Newsom — likely seeking a bolder national political profile — cast himself as the anti-Trump. The president did not take the attack lightly, announcing on Twitter he had ordered the Federal Emergency Management Agency (FEMA) to cease sending funds to California until it revised its forestry practices:

Billions of dollars are sent to the State of California for Forest fires that, with proper Forest Management, would never happen. Unless they get their act together, which is unlikely, I have ordered FEMA to send no more money. It is a disgraceful situation in lives & money!

Mr. President — Just yesterday, @OregonGovBrown, @GovInslee, and I sent a letter asking the federal government to work with us in taking on these unprecedented wildfires. We have been put in office by the voters to get things done, not to play games with lives. https://t.co/GjIVr6yxOP

Mr. President — Just yesterday, @OregonGovBrown, @GovInslee, and I sent a letter asking the federal government to work with us in taking on these unprecedented wildfires. We have been put in office by the voters to get things done, not to play games with lives. https://t.co/GjIVr6yxOP

House Minority Leader Kevin McCarthy (R-CA) rushed to minimize the political damage — as well as the potential loss of funds — with a statement assuring the public that “The President and his administration understand the severity of the devastation and have delivered for Californians. ” He added: “Republicans will offer an amendment to the Democrat’s [sic] spending bills that will be voted on the floor this week to increase money for forest management that will help prevent and reduce the devastation from wildfires that we saw a couple months ago.”

Democrats criticized the president, with Sen. Kamala Harris (D-CA) — a likely presidential contender in 2020 — saying Trump should fight climate change, and Sen. Dianne Feinstein (D-CA) saying Trump ought to remember that he is “president of the entire country” — despite California’s consistent efforts to oppose his governance.

Rep. Tom McClintock (R-CA), an ally of the president, criticized his tweet and urged him to reconsider. In his own statement, McClintock said that “the principal blame for California’s wildfires lies with federal agencies and laws which govern most of our state’s forests and brushlands,” not with state laws. He added that cutting FEMA’s funding to CalFire “would damage the one governmental agency that actually works” in the state of California.