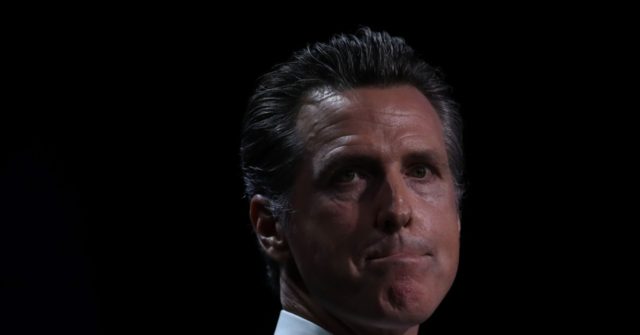 California Gov. Gavin Newsom (D) declared Tuesday Nike did the “right thing” in pulling its Betsy Ross flag sneakers. He then reminded the athletic wear giant his state is “open for business” after Arizona withdrew financial incentives for its planned manufacturing plant.

“Hey, @Nike — we’re just a quick jaunt over the border…Thank you for doing the right thing. CA is open for business and welcomes those that represent the best of our American values,” Newsome wrote on Twitter Tuesday, sharing a screenshot of Arizona Gov. Doug Ducey’s (R) announcement about yanking state money for Nike.

Hey, @Nike — we’re just a quick jaunt over the border…

Thank you for doing the right thing. CA is open for business and welcomes those that represent the best of our American values. pic.twitter.com/dLN7EuYBFS

Ducey’s decision came in response to a Wall Street Journal report stating former NFL anthem-protester and Nike pitchman Colin Kaepernick pressured Nike into pulling its America-themed 4th of July sneakers featuring the “Betsy Ross” flag because he and others found it offensive. “Nike has chosen not to release the Air Max 1 Quick Strike Fourth of July as it featured an old version of the American flag,” the sportswear company said in a statement to CNN Business regarding its decision.

In a series of tweets, the Arizona Republican explained the move to kill funding for Nike’s planned plant in the Phoenix-metro area.

“Words cannot express my disappointment at this terrible decision. I am embarrassed for Nike,” Ducey wrote. “Nike is an iconic American brand and American company. This country, our system of government and free enterprise have allowed them to prosper and flourish.”

“Instead of celebrating American history the week of our nation’s independence, Nike has apparently decided that Betsy Ross is unworthy, and has bowed to the current onslaught of political correctness and historical revisionism. It is a shameful retreat for the company. American businesses should be proud of our country’s history, not abandoning it,” the governor went on. “Nike has made its decision, and now we’re making ours. I’ve ordered the Arizona Commerce Authority to withdraw all financial incentive dollars under their discretion that the State was providing for the company to locate here. Arizona’s economy is doing just fine without Nike. We don’t need to suck up to companies that consciously denigrate our nation’s history.

“And finally, it shouldn’t take a controversy over a shoe for our kids to know who Betsy Ross is. A founding mother. Her story should be taught in all American schools. In the meantime, it’s worth googling her,” he added.

In addition to Newsom, New Mexico Gov. Michelle Lujan Grisham (D) has suggested she wants to cut a deal for Nike to open their plant in her state.

Nike has not commented publically on offers from the pair of liberal governors.