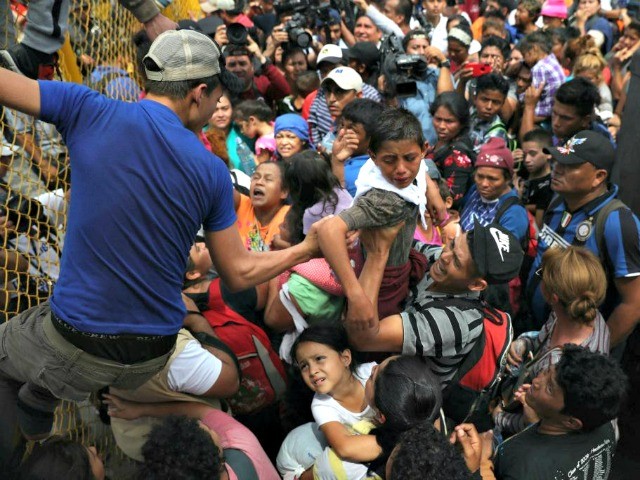 Five million poor Central Americans want to migrate into the United States’ communities and workplaces, according to a report by Gallup.

The caravans of economic migrants moving northwards to the U.S. border “actually represent a relatively small fragment of a much larger group of people in their own region — and around the world — who say they would like to move to the U.S. if they could,” said Gallup.

The estimate was posted by Gallup as President Donald Trump’s lawyers try to fend off lawsuits against his November plan to curb the growing use of asylum claims by economic migrants from Central America, including the migrants who are part of the caravans heading to the U.S. border.

On Tuesday, the ACLU and other elite groups who favor cheap-labor migration are asking a California judge to block Trump’s asylum-reform, anti-caravan plan.

Trump’s lawyers are expected to say his plan complies with Congress’ law by offering caravans of migrants full access to asylum courts if they apply at the border’s “ports of entry,” while also offering a limited form of asylum, dubbed “withholding from removal,” to migrants who illegally sneak into the United States.

If upheld, Trump’s “withholding of removal” fix would be a huge blow to the cartels’ labor trafficking business. It would be a blow because it would deny migrants the easy access to U.S. jobs which is needed to pay the cartels’ smuggling costs and profits.

In Gallup’s most recent global estimate, between 2015 and 2017, 15% of the world’s adults — more than 750 million people — said they would like to move to another country permanently if they could. In Central America, this percentage is one in three (33%), or about 10 million adults.

Three percent of the world’s adults — or nearly 160 million people — say they would like to move to the U.S. This includes 16% of adults from Honduras, Nicaragua, Guatemala, El Salvador, Panama and Costa Rica, which translates into nearly 5 million people.

For example, in Honduras, whose residents make up a large percentage of the migrant caravan, about half of adults (47%) say they would like to move to another country permanently if they could, but about 9% are planning to move in the next year — and 2% are actively preparing to do so.

However, these Gallup numbers may be far too low.

People stuck in their poor homelands may not want to admit their frustrated wish to migrate.

Also, rising migration spurs runaway migration once successful migrants use their cell phones to video and broadcast their glamorous success in Europe and the United States to their homeland peers in their towns, villages, and families.

Rising emigration cripples economic development in the homeland, so encouraging the next generation also to migrate.

The Mexican labor-trafficking cartels are expanding their business by offering to move people from Indian and African through their smuggling networks into U.S. jobs via the backlogged U.S. asylum system.

Migration is encouraged and welcomed by many Democratic legislators who rationally expect the government-dependent migrants to back their political party once the migrants are naturalized.

Many business-first Republicans support migration because it provides Wall Street investors and companies with a growing number of workers and consumers. Poor migrants and children are good for companies and investors because taxpayers are forced to spend more money on aid and welfare payments. That extra welfare spending becomes an indirect taxpayer subsidy for the many grocery stores, used-car dealers, teachers, landlords and other people who help or trade with migrants and their children.

The tacit alliance of progressives and investors, Democrats and Republicans, has largely blockedPresidentt Donald Trump’s effort to help ordinary Americans by curbing migration into U.S. workplaces and neighborhoods.