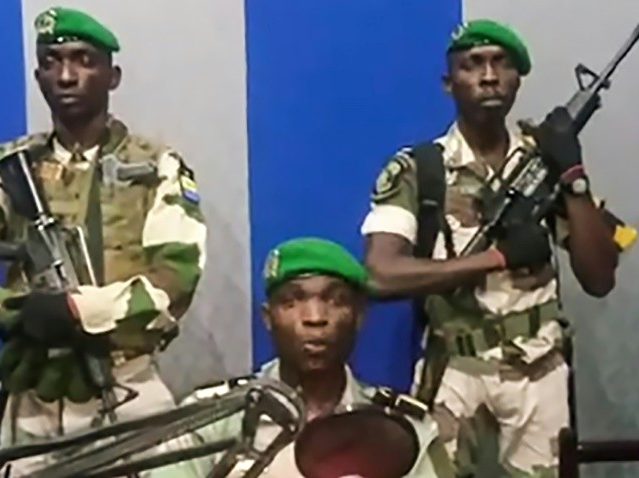 The government of the central African nation of Gabon claimed the situation is “under control” after a military coup early on Monday left two of the plotters dead.

Early on Monday, members of the Gabonese military launched a coup attempt and seized control of state-run radio in the country.

“Two of the coup participants were killed when security forces took over and freed some hostages, according to a presidential statement reported by RFI [Radio France International],” the Associated Press (AP) reports.

Citing comments to RFI by Gabon’s government spokesperson Guy-Bertrand Mapangou, AP adds, “Authorities have regained control of the state broadcasting offices and a major thoroughfare in the capital, Libreville, which were the only areas taken over by the officers.”

BBC also quotes the spokesman as saying the situation in the African country is “under control,” noting that authorities have arrested all five soldiers who tried to lead the coup.

“The situation is calm. The gendarmes who are often stationed there have taken control of the entire area around the radio and TV headquarters, so everything is back to normal,” said Mapangou.

“The government is in place. The institutions are in place,” he added, according to the Guardian. However, AP notes that the government has imposed a curfew over the capital and has cut the cord on the internet.

“The city on the Atlantic Ocean coast was being patrolled by military tanks and armed vehicles,” it adds.

Gabon has a long history of military ties with the United States. The African country houses one of U.S. Africa Command’s (AFRICOM) cooperative security locations, which serves “as bare-bones launching pads for quick-reaction troops called upon to secure U.S. diplomatic facilities in the broader region,” Stars and Stripes notes.

Via Twitter, the head of African Union Moussa Faki Mahamat reportedly expressed its ongoing support for the Bongo administration, stating, “The African Union strongly condemns the coup attempt this morning in Gabon.”

“I reaffirm the AU’s rejection of all anti-constitutional change,” he added.

Gabon’s minister of communications minister reportedly dismissed the rebels as “a group of jokers and the military hierarchy does not recognize them.”

Early on Monday, the rebels briefly seized control of the state-run radio station and broadcasted a call to “rise up “ while the country’s President Ali Bongo is in Morocco recovering from a stroke.

“The eagerly awaited day has arrived when the army has decided to put itself on the side of the people in order to save Gabon from chaos,” Lt. Kelly Ondo Obiang, the leader of the breakaway soldiers, reportedly declared on the radio.

“If you are eating, stop; if you are having a drink, stop; if you are sleeping, wake up. Wake up your neighbors … rise up as one and take control of the street,” he added, urging the Gabonese people to occupy the country’s airports, public buildings, and media organizations.”

Citing a witness, Reuters reports that the broadcast prompted a crowd of an estimated 300 people to gather at the state broadcasting headquarters in the capital of Libreville in support of the attempted coup.

“Reinforced doubts about the president’s ability to continue to carry out the responsibilities of his office” triggered the coup attempt, Lt. Obiang said, according to Reuters.

U.S. troops deployed to the central African nation of Gabon last week in response to potential violence in neighboring Democratic Republic of the Congo (DRC) remain committed to their mission despite prospective unrest linked to a failed coup attempt on Monday.

“At this time there is no change in the status of our forces in Gabon,” John Manley, a spokesman for U.S. Africa Command (AFRICOM), told Stars and Stripes as events in the country unfolded Monday.

The U.S. did not charge American service members with securing diplomatic assets in Gabon, he added.

On Friday, the White House announced it had deployed an estimated 80 combat-ready troops to Gabon amid concerns that issues over the recent elections in nearby DRC would result in violent clashes and potentially pose a threat to U.S. diplomatic assets.

“Oil-rich Gabon has been ruled for more than half a century by Bongo and his father, Omar, who died in 2009. Critics have accused the family of profiting from the country’s natural resources while not investing enough in basic services for the population of more than two million people,” AP notes. “About one-third of the population lives below the poverty line, according to the World Bank.”