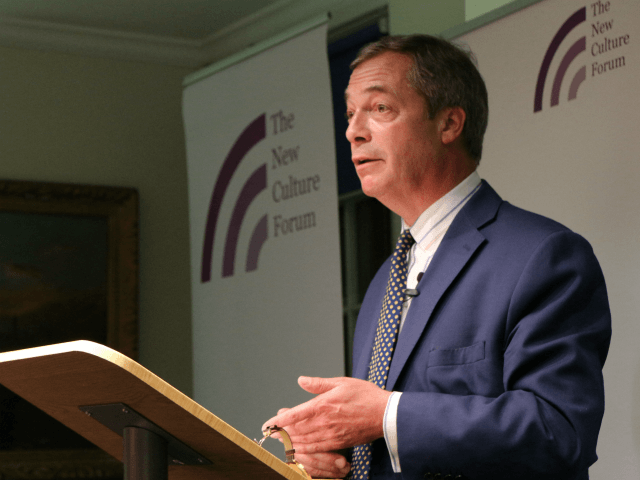 Nigel Farage has called for a Bill of Rights for social media users after tech giants were exposed for their bias against conservatives.

Mr Farage told the audience in attendance at The New Culture Forum, which was also watched live by some-60,000 on Facebook, on Thursday night in London that the election of Donald Trump as U.S. President, Brexit in the UK, and the rise of the populist Italian government “could not have happened without the use of social media”.

However, it was after the election of President Trump in November 2016 that the owners of the social media platforms that had facilitated the “global revolt” had become a “threat” to the “democratic process”, by practices such as the shadowbanning and censoring of conservatives. A tape leaked to Breitbart News Network last week revealed leftist political bias in the highest echelons of power at tech giant Google and sent shockwaves through the media and tech establishment.

“The reaction that we’ve had from those that own these social media sites pose a threat, in my view, to free speech — indeed the entire democrat process. We have got to stop the bias,” the former UKIP leader said.

“It was the events of the 8th November 2016 when Trump won when the owners of those social media sites began to change their thinking and indeed their practices,”  he added, singling out Google, which he termed the “gateway” to information, given it has over 80 percent of internet searches.

“The day after Trump got elected, the biggest internet search engine, the most powerful, important tech company in the world… effectively declared war on the whole populist revolt that was happening across the West,” the MEP said.

Discussing the monopoly of tech firms run by Silicon Valley liberal elites, Mr Farage said: We have fewer than a handful of companies that now control the entire future of our democratic debate across the entire Western world and I think that now has very worrying implications.”

“I do think the issues at stake here are so fundamental and so important we cannot allow the whole future of political discourse… to be held in the hands of two or three people who through their own mouths have shown themselves not to be politically neutral,” he said.

“I believe that Donald Trump and [campaign manager] Brad Parscale will go into the 2020 Presidential Elections promising a Bill of Rights for social media, doing their best to address this imbalance, to end the bias,” he said, adding that similar bills could be adopted in the UK and Europe.

“This is the means by which the future generation will gain their information, will form their opinions. We have to do our absolute utmost to make sure this is done in a fair, unbiased way as it can be.

“The whole future of trust, faith, and belief in our democratic processes relies on it.”

Mr Farage also raised the issue of tech companies punishing those attempting to use the internet to “propagate violence, terrorism, and extremism” — but warned that such powers, if the bias goes unchecked, can be used to “close down debate on sensible democratic conservative values”.

Breitbart London asked the UKIP MEP whether countries such as Germany were outsourcing the suppression of dissent to Silicon Valley, given that two years ago, Chancellor Angela Merkel was caught on tape urging Facebook CEO Mark Zuckerberg to clamp down on so-called “hate speech” from Germans after she had invited migrants in unlimited numbers into the country.

Sergey Brin says he is “deeply offended” by result.

“Merkel is more vulnerable to criticism of her immigration policy, cultural policy, and religious difficulties than any other leader in Europe,” Mr Farage told Breitbart London, “because of the historic mistake that she’s made.

“Any attempt in Germany to condemn and criticise the sheer stupidity of what Mrs Merkel did, they want to box that off as being hate speech or neo-fascist.

“It suits them (European leaders), it suits her very much to work hand in glove with these big companies.