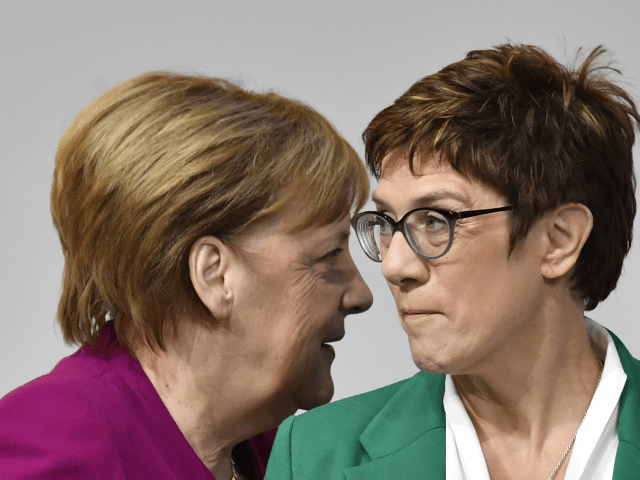 The woman largely expected to take over as chancellor of Germany has echoed calls by her mentor Angela Merkel and French ally Emmanuel Macron for a “European army” to avoid becoming a “plaything” of Russia, China, and the United States on the global stage.

Dr Merkel’s successor as leader of the Christian Democratic Union (CDU) party Annegret Kramp-Karrenbauer (also referred to as AKK) made the comments on Tuesday during a speech in the EU capital Brussels where she outlined her party’s campaign themes ahead of May’s European Parliament elections.

Stressing the idea of the “Europe of security,” Ms Kramp-Karrenbauer said Brussels must push forward with a common defence policy, which “must someday also include a European army.”

“An EU army fighting alongside national forces would be the logical step if we do not want to become a plaything between China and America or Russia and America,” she said according to Süddeutsche Zeitung.

The role of party leader in the CDU and the position of chancellor in a CDU majority government are meant to go hand in hand in Germany, and the Christian-centre-right grouping has provided chancellors for a total of 50 years in the last seven decades.

Given that the CDU is widely tipped to win again in federal elections in 2021, it is likely AKK will occupy the seat, with the protégé showing signs of following in the current chancellor’s footsteps in terms of policy, including sharing the keen support Dr Merkel has expressed for a “real, true European army.”

In mentioning world powers China, Russia, and the United States, AKK also evoked French President Emmanuel Macron, who became, with comments made by the progressive leader in November, the first European leader to pronounce support for an EU army, specifically “to protect ourselves with respect to China, Russia and even the United States of America.”

France and Germany, dubbed the “Franco-German couple” by Macron which seeks to stop the world “falling into chaos” by saving it from populism, have already taken first steps in their new project signing a declaration last month pledging to integrate defence and announcing a next-generation fighter jet project this week.

Brussels bureaucrats were “delighted” at the end of last year that France and Germany were taking the lead on arming the European Union — an endeavour the bloc hopes to accomplish by 2025. But NATO allies had expressed concern that the EU will prioritise the European project’s military plans over contributing to defence for the North Atlantic union — with only six of the 29 NATO members paying the minimum two per cent of GDP for shared defence.

President Donald Trump has criticised countries like Germany which have benefitted from the protection of NATO but have contributed little to it. That looks likely not to change in the case of Germany, with the country not expected to meet its own, much reduced, spending target that it set itself of 1.5 per cent, spending just 1.24 per cent last year.

The U.S. president put NATO spending at the forefront of his international defence strategy, and he will return to the UK in December for the 70th anniversary of the North Atlantic Treaty Organization, where President Trump is certain to reiterate calls for allies to pay their fare share.