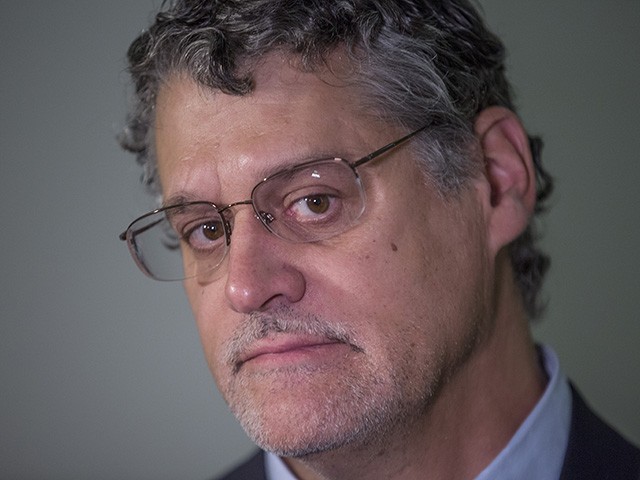 Glenn Simpson, the co-founder of Fusion GPS, the opposition research firm behind the infamous Steele dosser, invoked his Fifth Amendment rights before House investigators on Tuesday.

Simpson’s attorney, Josh Levy, decried a joint committee investigation into potential political bias in the Justice Department and Federal Bureau of Investigation (FBI) during the 2016 presidential election as McCarthyism.

“This committee would make Sen. Joseph McCarthy proud,” Levy told reporters on Capitol Hill. “Like Sen. McCarthy, this committee has largely conducted its business through secret, confidential interviews and depositions, binding witnesses and their counsels into silence while the members walk outside to all of you the media with public and selectively leaked interviews to tell you what they want you to hear.”

“Mr. Levy is looking for a moment on all the networks so that he can have a viral moment attacking the credibility of an investigation,” Meadows added. “It was his client that refused to answer today. It was his client that has made a number of assertions that, quite frankly, are not being supported by the facts.”

Simpson finds himself in the crosshairs of House Judiciary and Oversight Committee members after Justice Department official Bruce Ohr recently told lawmakers he met with the Fusion GPS co-founder prior to election day — an explosive detail in direct conflict with Simpson’s testimony last year.

However, some Republicans say they aren’t shocked that Simpson is now apprehensive to speak to investigators. “I’m not surprised Glenn Simpson is taking the Fifth. He probably should,” Rep. John Ratcliffe, a member of the House Judiciary Committee, told Fox News host Maria Bartiromo on Sunday. “He’s in real legal jeopardy. Very clearly, someone is not telling the truth.”

As reported extensively by Breitbart News, Fusion GPS commissioned the Democrat-paid dossier, which included far-fetched and uncorroborated claims alleging President Donald Trump’s links to the Russian government. Earlier this month, Meadows revealed former FBI general counsel James A. Baker gave “explosive” testimony which “confirmed that things were done in an abnormal fashion” regarding the bureau’s handling of the Russia investigation.

“Meadows claimed the ‘abnormal’ handling of the probe into alleged coordination between Russian officials and the Trump presidential campaign was “a reflection of inherent bias that seems to be evident in certain circles.” The FBI agent who opened the Russia case, Peter Strzok, FBI lawyer Lisa Page and others sent politically charged texts, and have since left the bureau,” reported Fox News chief Intelligence correspondent Catherine Herridge.

“During the time that the FBI was putting — that DOJ and FBI were putting together the FISA (surveillance warrant) during the time prior to the election — there was another source giving information directly to the FBI, which we found the source to be pretty explosive,” Rep. Jim Jordan (R-OH) told Herridge following Baker’s testimony.

Committee chairmen Goodlatte and Gowdy have yet to announce there next steps to impel Simpson to testify before House investigators.