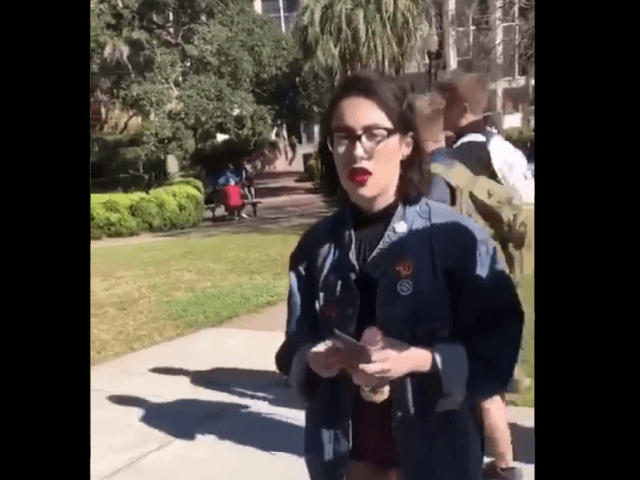 A Facebook video of the altercation shows Shelby Shoup, a student at the university who describes herself as a volunteer for Florida Democratic gubernatorial candidate Andrew Gillum, yelling at a group of FSU College Republican volunteers before allegedly throwing chocolate milk on them.

“I hope y’all realize that you are normalizing and enabling Nazis,” Shoup said in the video, which has gained more than 137,000 views on Facebook as of Sunday morning.

“Eleven of my people are f******* dead this weekend,” she continued, making a reference to the Pittsburgh synagogue shooting that killed 11 people.

The woman then yelled, “F*** Ron DeSantis,” and kicked a Ron DeSantis for Governor sign out of the grass before leaving the scene.

The victim, identified as FSU College of Republicans Vice-Membership Chair Daisy Judge, told police Shoup poured chocolate milk on her while she was tabling for the college Republican group in two separate instances.

A witness told officers Tuesday afternoon that he began filming the incident after Shoup poured the chocolate milk on her victim a second time.

Florida State University Police issued a warrant for Shoup’s arrest on Thursday, and she turned herself in later that afternoon.

Authorities took Shoup to Leon County Jail, where she was charged with battery. She spent the night in jail and was released the next day.

She is scheduled to appear in court again November 28 for a case management hearing.

Shoup stated on her LinkedIn page that she is an intern for Gillum’s gubernatorial campaign, although campaign spokesperson Geoff Burgan said he “can’t comment” on whether she officially served as an intern or campaign volunteer.

“The latest ordeal, which hits home for many of us on the Executive Board, is an alarming display of the extremely charged political environment that has arisen in recent months and years,” the FSU College Republicans said in a statement. “No person, regardless of where they fall on the political spectrum, should be targeted and assaulted because of their political beliefs.”