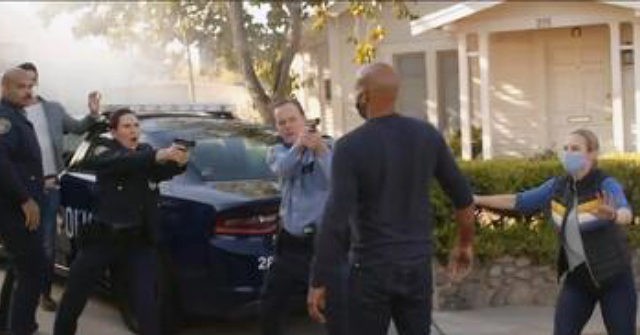 With the opening of the 2021 season, Network TV went ultra-woke, pushing anti-police themes, Black Lives Matter narratives, and left-wing storylines. Writers’ rooms throughout Hollywood are working hard to keep race at the top of viewer’s minds after left-wing activists pressured the networks to change the way they portray black Americans and the police.

The season kicked off in November with series such as This Is Us, Law & Order: SVU, S.W.A.T. The Good Doctor, and Chicago PD all pushing social justice storylines that tout systemic racism and portray law enforcement in a negative light.

As the TV season resumed after a vexing coronavirus break, drama This is Us featured a segment where Sterling K. Brown fired his white therapist because a white person can’t understand a black man, and later attacked his white, adopted sister for not talking about race when he was young.

Others went deep into anti-police narratives.

Law & Order: SVU launched its season with an attack on police, including star Ice-T speaking about how blacks can’t trust the police. Chicago PD depicted a black cop framed by dozens of racist white cops. S.W.A.T. star Shemar Moore’s character is shown being lectured about bad cops in L.A. Meanwhile, The Neighborhood claimed that police in America are somehow “the same system as slavery.”

Many shows pushed other left-wing narratives. The Good Doctor featured a lead character wearing a Black Lives Matter shirt, and the re-boot of Magnum P.I. made claims that American policing is a “broken system.”

Network TV continued hitting the woke narratives as the weeks rolled onward and into the new year, and several new shows were introduced.

The newly debuted Clarice, also went woke. The show is a Silence of the Lambs follow-up series following Clarice Starling (played by Jodie Foster in the 1991 movie and Rebecca Breeds in the new series) in her FBI duties after she became famous for catching murderer Buffalo Bill. The series features a transgender character and shoehorned the Black Lives Matter narrative into a recent episode.

One of the most recent Chicago P.D. episodes this year featured an argument between a black cop and his longtime white partner in which the black cop accused his partner of “hiding behind being white.”

In another case, ABC’s Station 19 shocked viewers with a brawl between firefighters and police outside a house in which black girls were being held by human traffickers.

Finally, as it has increasingly done, The Simpsons continues to descend into woke territory by hiring new black voice artists to take over characters previously voiced by white characters.

There are more examples, of course, as each show rolls onto screens across the country. But these serve as perfect examples of the wokeness network TV is developing.