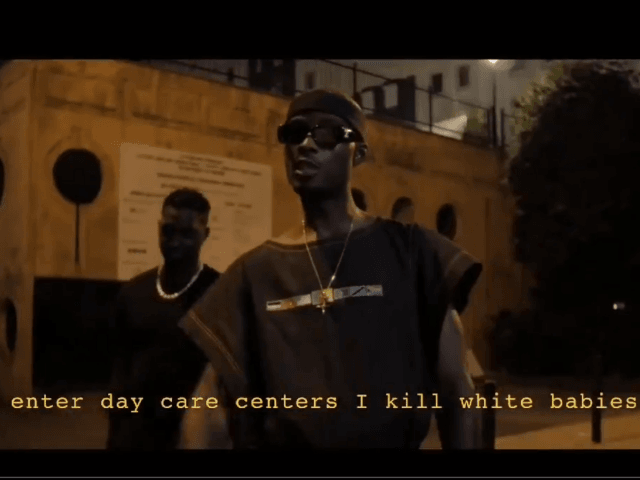 French rapper Nick Conrad could be facing charges of hate speech after releasing a new song in which he advocated for the hanging of white people and the killing of white babies.

The black rapper released the song Pendez Les Blancs or PLB, or “Hang the Whites,” on an EP several months ago but the video for the song caused controversy across France and ended up being taken down from social media platform YouTube earlier this week RTL reports.

The lyrics of the song called for the killing of white people saying, “I enter day care centres and kill white babies. Catch them quickly and hang their parents. Spread them apart to pass the time, to entertain black children of all ages young and old.”

While the full video was removed from YouTube, Romain Espino, a member of the French hipster-right anti-mass migration activist group Generation Identitaire posted a clip of the video on Twitter, which itself was subsequently deleted.

The clip showed the rapper with a pistol walking after a white man crawling on the ground in his underwear and in a scene reminiscent of the film American History X, the rapper forces the white man to bite a curb as the rapper appears to stomp on the back of his head.

Conrad, a previously unknown rapper in France, defended the song and the video saying, “it’s not a call to hate,” and adding, “This piece is deeper than it seems.”

“I can not deny what I wrote, it touches racism, it’s the beauty of this piece, it’s still art,” he said.

Anti-racism organisation LICRA have called for the rapper to be prosecuted for hate speech and many others have expressed outrage over the song.

Anger over Plans for Anti-French ‘Jihad’ Rapper to Perform at Bataclan https://t.co/6o2diKRtZh

Populist leader Marine Le Pen tweeted about the song saying, “While many compatriots undergo anti-white racism, of which no self-proclaimed expert or media speak, this provocation must not be unpunished. There is nothing artistic in what is purely and simply a call to hatred and murder!”

The case is just the latest rapper to stir controversy in France. Next month rapper Medine, who released an album called “Jihad,” was supposed to perform at the Bataclan, the site of an Islamic State terror attack that killed 90 people in 2015, but ended up cancelling his performance due to pressure from a father of one of the victims.

In 2016, rapper “Black M” also saw his performance at the 100th anniversary of the World War One Battle of Verdun cancelled due to outrage over the content of some of his songs which called native French people “kuffar,” the Arabic word for infidels.